Find all of my scorching (adult 18+) love stories in ebook and paperback wherever books are sold.  Madeline Archer writes the rest. I invite you to visit my author pages on Amazon: Rose Anderson and Madeline Archer. Most of my books have a feature called  Look Inside. You can read a sample portion of each.

Heart of Stone by Madeline Archer (a novelette)
A lonely young woman pours her heart out to a man carved in stone. Little does she know there’s magic afoot…

The story begins with the 17th Century witch hunts of Salem, Massachusetts.

As formal education for women lacks substance in 1904, Neila Flannigan leaves Ireland to attend Radcliffe women’s college in America. Shy and introverted, Neila passes her lonesome hours sketching the Harvard grounds and sending them home to her father. A chance encounter with a kindly old Irish woman inspires her to sketch a statue in an old unused building. Desperately lonely, Neila ends up sharing her thoughts and feelings with a man carved in stone. Some days it feels like he listens.

“Heart of Stone by Rose Anderson. It is a Fantasy Romance and set in 17th Century Salem, Massachusetts. I love these kind of stories.”
~ A reader

The Changeling by Madeline Archer

Half-fae Lenox Pendry is surrounded by secrets and none are his to keep. Plucked from his mother’s arms as an infant and raised a changeling, Lenox grows to adulthood unaware of what and who he is and oblivious to the danger unfolding as his birthday draws near. After he’s unwittingly sent to the Scottish Lowlands out of harm’s way, he chances to meet a beautiful healer named Janet Roxburgh. The townspeople believe her to be a witch. It would appear Janet has a few secrets of her own.

Inspired by the Scottish ballad of Tam Lin.

Alexander MacCodrum belongs to a race of shape-shifting sea creatures living on Scotland’s Isle of Skye.

When Jenna MacLeod unknowingly adds seven tears to the salt of the sea, she accidentally unleashes an ancient charm that catches the transformed Selkie unawares. Under this binding spell, Alex must win Jenna’s heart, or the pain of unrequited love will drive him to take his own life. Unfortunately for Alex, Jenna hasn’t come to Skye looking for love and it will take the force of a hurricane to bring them together. But worse, Jenna’s violent ex-boyfriend has found her at last and Carl has made it perfectly clear – if he can’t have her, no one can.

The Witchy Wolf and the Wendigo by Rose Anderson

What does an immortal Native American shaman do when the grave he’s sworn to watch over for all eternity disappears under urban development?

His purpose of guarding his wife’s burial mound is gone, Ashkewheteasu seeks to end his immortal existence. In his despair, Ash assumes the form of a wolf and steps in front of a moving car and into the life of Dr. Olivia “Livie” Rosalini. The veterinarian saves the animal’s life, and in the process saves the man within. Livie has no idea the wolfish dog she’s taken into her home and grows to love is a magical being seeking to win her heart as a man. While Ash is learning a new world filled with new love, friendship, and happiness, an old menace makes plans to steal it all away; just as he had 3000 years before. 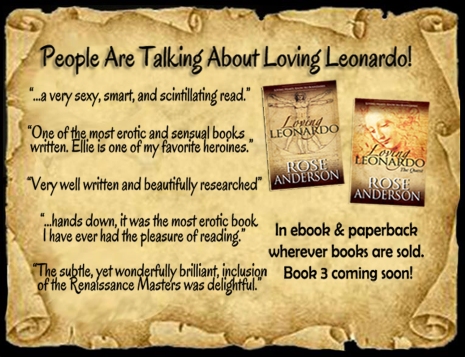 Bound by limits dictated by society, Art Historian Nicolas Halstead lived a guarded life until a tempest in the form of Elenora Schwaab blew into his world. After Ellie tells him of a previously unknown work of Leonardo da Vinci, a book of erotic love poems and sketches dedicated to the artist’s long-time lover Salai, Nicolas joins her in a race to save the book from destruction. Along the way they encounter Historian Luca Franco and discover a comfortable compatibility that comes to redefine their long-held notions of love. The trio embarks on an adventure of sensual discovery, intrigue, and danger. Little do they know Leonardo da Vinci’s book is far more than meets the eye. 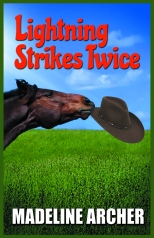 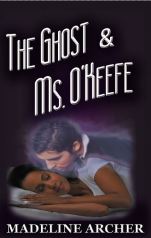 My full-length novels can be found in ebook and paperback through most online book markets. Want to see them at your local library? They’re available. Ask your librarian.  😀

8 Responses to My Novels