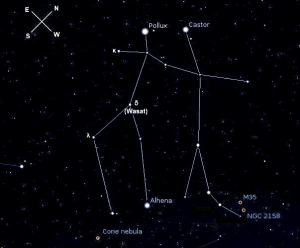 With my busy December on at full steam ahead, I’m reposting interesting blog posts written over the past 12 months. It’s a way of taking stock of what I’ve been up to this year outside of my professional writings. Just in case you haven’t noticed, (lol) my early morning blogging is a stream of consciousness sort of thing. Sometimes I surprise myself! This head of mine is filled with all kinds of obscure things. Case in point: December’s Geminid meteor shower occurs this coming Sunday and Monday. Looking to the skies, the higher the constellation Gemini climbs, the more meteors you’re likely to see. A bonus to this celestial event is the waxing crescent moon. With an almost moonless sky, viewing the typically bright Geminids should be a good show.

Conversely, did you ever wonder what the sky sees when it looks down on us? Most people can name a few things off the top of their head: The Great Wall of China, the pyramids, the Nasca Lines. There’s a lot more to be seen from the sky. A lot of mystery too. Here’s (an updated bit) I wrote about geoglyphs a few years ago...

White Horse of Uffington.
A geoglyph is a large drawing cut into the ground. Called Hill Figures in Britain, an estimated 57 of these artworks are scattered throughout the UK, but not all are ancient works. The most recent is the Folkestone Horse created in 2003. Horses seem to be a popular theme. In Wiltshire alone, there were eight chalky horses (two have since disappeared). Aberdeenshire has a horse was cut into quartz, and the Red Horses of Warwickshire were were cut into the red loam. One of the largest and most famous geoglyph is the Cerne Abbas Giant in Britain. Some say he’s a huge fertility symbol, others just call him the Rude Man. Look him up. I’m guessing fertility symbol.

Gouged into the rolling English hillside near the village of Uffington in Oxfordshire, is one of the most famous geoglyphs in the world — the White Horse of Uffington. Experts determine the horse was created around 3000 years ago during the Bronze Age or early Iron Age; the time of Stonehenge.

Most people see a stylized horse on the run when they consider the white chalk outline, but some feel the original head structure and curvature of the legs represent a large cat…a lion or cougar perhaps. That it’s a horse is a long held notion. Early references from the local Abbingdon Abbey in 1072 AD, refer to the hillside as Mons Albi Equi or White Equine Hill. Given the age of the artwork, it’s all speculation. I see both.

Like the Cerne Abbas Giant, the White Horse of Uffington was created by carving through turf to reveal the white chalk underneath the soil. Since open spaces like this soon fill in with plants and soil, many of the figures scattered across the UK are slowly being covered. The Uffington hillside and the White Horse require regular maintenance to keep it looking its best. To those who know things like this, it’s estimated it would only take 150 years to cover over completely. It makes me wonder what other images are hidden in the grass.  Researching this prehistoric artwork, I’m struck by the fact there has been an unbroken chain of people tending it for the last 3000 years. That’s amazing all by itself!

An interesting clip (with enchanting music) showing all the Hillside Horses in Great Britain, both old and new ~

More~
Figures of all sorts are found worldwide both ancient and modern, and curiously, all were designed to be seen from above. When I think of geoglyphs, the enigmatic Nazca Lines in Peru come to mind — lines and pictures so old no one alive knows their purpose. A surprising number of countries have them. Seen from the air, Saudi Arabia, Syria and Jordan have an array of wheel shaped etc. They’re referred to as the Works of the Old Men. No one knows who made the enormous Marree Man in the Australian outback, or the Blythe Intaglios in the Colorado Desert. The oldest geoglyph yet discovered may be found in Zyuratkul Mountains in Russia– estimated at 4000 years old. The ancient Palpa Lines created 1000 years before Nasca are a mystery too.

And add to these those other famous, yet mysterious, earthworks: The Great Serpent Mound of Ohio, the giant earthworks in northern Kazakhstan. Then we have crop circles and who knows how all that started. Here’s Google Earth so you can see all of these and the rest. You can look them up on youtube as well. Have fun!
http://www.google.com/earth/index.html

25 Of The Most Bizarre And Unique Finds On Google Earth

Scroll down to see previous vintage postcards and learn how postcards became popular greetings to send, what is cost to send them, and about the big changes made after WWI.