While my creative focus goes off to do other December things, I’ll be reposting interesting blog posts I’ve written over the past 12 months. It’s a way of taking stock of what I’ve been up to this year outside of crafting novels and organizing anthologies. Just in case you haven’t notice, lol, my early morning blogging is a stream of consciousness sort of thing. Sometimes I surprise myself! This head of mine is filled with all kinds of obscure things.

As December and 2015 come to a close, I’ll also post all the things that made me smile this year. There’s nothing better than ending a year on a smile and I know you’ll smile too. No matter the maelstrom of ideological war, extremist behaviors across the board here and abroad, and shades of world sadness I can’t begin to describe, taking a moment to smile puts power in your hands…the power to say humanity is so much more than all of that. Smiles and laughter are found in all cultures. They remind us how alike we are and that alone proves there is room aplenty for solutions and possibilities. Our thoughts are our reality and thinking up can change the world. I truly believe that.
I did say I’m a stream of consciousness blogger.   🙂

The following (with updated commentary) comes from the A to Z Challenge I took part in early last spring. It’s a timely post.

I for Ice Harvesting

Ice is one of those common things we just don’t think about, (unless we’re in a hurry and  have to scrape it off our car windows or ice sends us sliding into a ditch on a winter’s day.)  Ice as we’ve come to know it in cube form is a relatively recent creation, but ice use goes back a long way. History is filled with stories of emperors and kings sending servants into the mountains to gather up ice and snow to be used for desserts and drinks.  Some things are just better served cold. Before modern refrigeration came on the scene, we employed ice houses and cold spring houses to keep our foods fresh.

I for Icy Inspiration

In the early years of the United States, many wealthy Americans had ice houses where blocks of winter ice cut from frozen ponds were stored. Written in the household accounts of Thomas Jefferson and George Washington are references to these structures on the grounds. At this point in history ice was a regional luxury. I’m not sure how cold Virginia winters get for these two famous men to have ice in their ice houses. Perhaps they had it shipped in from the northern states. New England winters, however, were cold enough for lakes and ponds to freeze over several feet thick. This ice was cut, packed in sawdust for insulation, and stashed in ice houses where it would last well into the summer months.

In Massachusetts in 1805, wealthy merchant Frederic Tudor was enjoying a family picnic which included ice cream. The story goes he joked with his brother about how people in the sweltering West Indies would give anything for ice cream and cold drinks. That idea resonated with Frederick. Thirty years later Frederick would be known as the Ice King who made a business of shipping ice to people living in the warmer climes of Cuba, Calcutta, South America, and China, as well as to the hotter cities in the union such as Charleston and New Orleans. There’s even an account of ice being shipped from  Massachusetts to England’s Queen Victoria. He’s credited with the first large scale commercial ice industry in the United States. Needless to say, Frederick Tudor became a very wealthy man. And it began as a whimsical comment made over a dish of ice cream!

Free for the Taking

Harvesting natural ice became a prosperous business in New England during the 19th
century.  It wasn’t all used for cold drinks and frozen treats either. Restaurants, hospitals, dairies, breweries, markets, and meat and fish packers needed ice too, so business boomed.  One of Tudor’s ice harvesting foreman by the name of Nathaniel Wyeth developed specialized plows and saws to improve the harvesting of ice. Ledgers show the

In 1856, the average household had an icebox. (Funny how words linger. As a child I had older relatives refer to the refrigerator as the icebox.)

Ice cost 50⊄ for 100 pounds in 1923.  By 1930, Frigidaire synthesized Freon and opened the door to modern refrigeration. Shortly after, the refrigerator brought an end to the ice harvesting era.


Enjoy this last video clip. Have a smile on me. 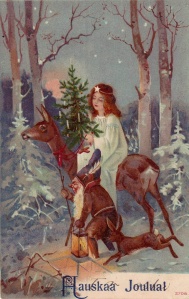 Scroll down to see previous vintage postcards and learn how postcards became popular greetings to send, what is cost to send them, and about the big changes made after WWI.

“It is the life of the crystal, the architect of the flake, the fire of the frost, the soul of the sunbeam. This crisp winter air is full of it.”
~John Burroughs