Boy, the season is rapidly changing. That’s too bad. I love when autumn takes its time. The hazel bushes are still colorful but will soon race to see who will drop the last leaf. Rain is on the way and that’s sure to speed things up. The ash tree in the yard is particularly lovely. It’s sad to say but with the emerald ash borer destroying the country’s ash trees, that poor tree is on borrowed time. We’ve had some hard frosts here on the hill. Cold nights and warm days change the oak leaves red and puts an end to the mosquitoes and ticks that robbed joy from my backyard all summer.

If you’ve been to my blog before, you’ll know I occasionally write about my various plagues. That’s really the only word to describe it. The plagues here are almost biblical. The window wells will soon be wriggling with amphibians that have to be relocated. (Picture a large roasting pan full.) Many’s the winter where we had to keep a terrarium because the last critters weren’t discovered until the ground was frozen. I live in a country farmhouse. I know I’ll never win.

I’ve mentioned the mice have come inside and the human/dog/rodent war being waged. I can’t express how I hate killing things that just want to survive on my dime. I have my war with winter mice. I also have summer frogs, autumn toads, snakes, and salamanders, and my spring ants. The latter I leave alone and they eventually stop coming in. Sure freaks out the house guests though. lol Temporary ants are nothing compared to the rest. I once saw a fox snake, a two foot long fox snake, slip under my refrigerator when I walked into the kitchen. Where it went from there I can’t say. I never found it dead or alive! I once got bit by a fox snake in my bookcase that I mistakenly assumed was a rubber toy. Sometime in the near future, I’ll post about the more unusual animals who’ve come into my house uninvited. Sometimes when I tell people about them, my own words are hard to believe, but I swear every word is true. Muskrat in the bedroom, really?? I’ll save this tale for another day. It should be in a book. 😉 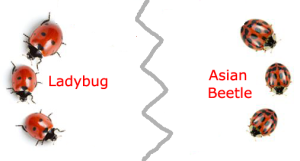 Those blasted ladybug mimics are out en masse now. The real ladybugs come out in the spring. These Asian monsters appear this time of year. My family thinks I’m crazy for hunting them with my tools of the trade –a ruler and cup of soapy water which I knock them into so they die. Yes, I know, this statement just contradicted the last paragraph where I said I hated killing things. I just really loathe these bugs in the house. They stink, they bite, they cluster like a nightmare in the corners of the ceiling, and because I write under a ceiling light, they fall on me. There’s nothing worse than having them drop on you, especially when they get inside your shirt and bite. Or you discover one in your hair and it leaves that nasty acrid stink behind. Ick. 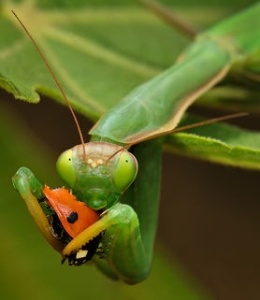 I saw something quite cool the other day, a praying mantis hunting on our garage door. The box elder beetles are emerging now and this consummate hunter was snatching them as they landed within “arm’s reach”. Their front legs unfold and *wham* munch.. munch.. munch. Funny thing — I found it midday and planned to show my husband when he came home from work. He came home, opened the door, and said, “Come outside quick, there’s something I want to show you!” I said, “Is it the praying mantis hunting on the garage door?” It was. We know what the other finds interesting. lol

One year I asked him to bring a praying mantis in the house. That’s not as odd as it sounds. Not odd at all as far as people who know me are concerned. lol In some countries a house mantis is kept to eat roaches and whatnot. Asian ladybug mimics being eaten by a pet praying mantis is a very appealing thought. My poor husband picked one up in his bare hands and walked it back to the house. Along the way, it bit the heck out of him. I never did get my house mantis. Maybe I’ll use a net…

Sunday’s Six of the Best
Rose Anderson other blog
http://calliopesotherwritingtablet.blogspot.com/

A 5-star review of The Changeling!

♥My other new release~
Entice Me – a multi-author collection for 99¢. My story is Heart of Stone
And 5-star reviews for Entice Me too.

“The purpose of life is not to be happy. It is to be useful, to be honorable, to be compassionate, to have it make some difference that you have lived and lived well.”
~Attributed to Ralph Waldo Emerson

Ending soon– CONTEST♥♥♥
In honor of the first anthology by the Authors of Romance Books ‘4’ Us, we’re running an additional October contest. Prizes include a $100 Amazon Gift Card and a terrific “super power” Romance Reader or Romance Author t-shirt. If you’re into romances, the t-shirt will make you smile.
There are three ways to enter!
😀