In 1831, a 22-year-old scientist named Charles Darwin boarded the science vessel H.M.S. Beagle (a refitted 10-gun war sloop), and departed England bound for the Canary Islands and South America. Throughout the 5-year voyage, Darwin kept notebooks and recorded his observations. These he would put in the weighty five-volume set~ The Zoology of the Voyage of H.M.S. Beagle (later renamed The Voyage of the Beagle). In one entry, he mentions the unique qualities of cuttlefish:

“This cuttle-fish displayed its chameleon-like power both during the act of swimming and whilst remaining stationary at the bottom. I was much amused by the various arts to escape detection used by one individual, which seemed fully aware that I was watching it. Remaining for a time motionless, it would then stealthily advance an inch or two, like a cat after a mouse; sometimes changing its colour: it thus proceeded, till having gained a deeper part, it darted away, leaving a dusky train of ink to hide the hole into which it had crawled.”
~Journal of Researches, HMS Beagle Voyage, Jan. 1832

I just love cuttlefish and octopuses. I’m in awe of these creatures just like Charles Darwin was. I even have a Pinterest board just for cephalopods. lol What can I say? I’m a nerdy girl. But I’m not alone in my mollusk admiration. Today sets off International Cephalopod Awareness Days. No kidding. 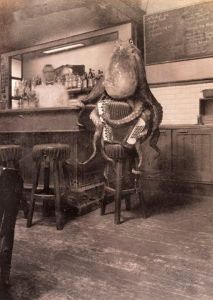 Cephalopods are a class of mollusk that includes cuttlefish, octopuses, squids, and nautilus. Would you believe they’re represented in the fossil record dating back 500 million years?

Cephalopod~ from the Greek kephale for head and pod which comes from pous for feet. Head feet? As you might have guessed, I get a kick out of breaking words down to their origins. I have more in honor of the day:

Cuttlefish~ from Old English cudele and Middle Low German küdel , both meaning container or pocket. From the Old Norse koddi meaning cushion or testicle. So that’s where Old English codd pieces get their name.

Octopus~ from the Greek oktṓpous — literally eight-footed —octo for eight, pous for feet.

Squid~ possibly from late Middle English squirten or to squirt. Squid as we know it could be a sailors’ variant of squirt in reference to the ink the animal squirts out. No one knows for sure.

More~
Download a free copy of the Voyage of the Beagle

Anatomy of a cuttlefish

CEPHALOPODS OF THE WORLD – For cephalopod enthusiasts everywhere! This is an annotated, illustrated catalog of known cephalopod species in one free pdf download. Contains just about all you could possibly want to know.

Top 10 cephalopod stories from 2011 (will make you think twice about eating calamari!)

That was fun. Happy Cephalopod Days everyone!

If you missed me at Author Denysé Bridger’s Fantasy Pages yesterday, I was sharing how the idea for Heart of Stone came about.  We authors all receive that moment of creative combustion. All we need is the spark.  Read Here.

If you missed last week’s post at Romance Books ‘4’ Us, I was sharing an interview with two charming characters from Heart of Stone. No need to go looking for it. I’ve added to a new page on this blog. See up at the top where the tabs are? Look for Free Reads. I have several character interviews there. Enjoy!

Coming October 10th!
Available for pre-order now.
Entice Me – a multi-author collection. My story is Heart of Stone

The Changeling – A story inspired by the Scottish ballad of Tam Lin.

Coming in November!
Available for kindle  pre-order now. Paperback on the way.
We’d Rather Be Writing – a multi-author cookbook and time-saving tips.
(88 authors in this one)

Madeline who? As Rose Anderson I write the intimate side of award-winning romance and will continue to do so. As Madeline Archer I write the other flavors of fiction. It might be a sweeter love story, an otherworldly walk in the twilight zone, or something dark…

Hope is a risk that must be run.
~George Bernanos