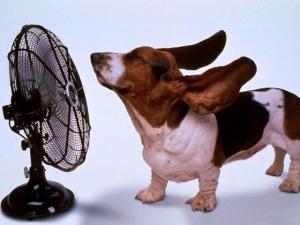 1. The hot, sultry period of summer between early July and early September.
2. A period of stagnation.
From the Late Latin diēs canīculārēs (literally means days dog).

Mention dog days and most people will immediately draw a summer connection. It’s hot, dogs are in the shade with lolling tongues. It brings to mind this phrase from Rudyard Kipling who made this comment of his colonial India of the late 19th century, “Only mad dogs and Englishmen go out in the noon day sun”.  However, the origin of the phrase dog days has nothing to do with our tail-wagging furry friends sweltering with the rest of us. It has to do with stars, or to be specific, one star — Sirius the Dog Star rises and sets with the sun during this time. 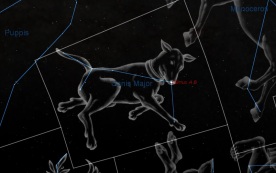 Sirius, the Dog Star, is the brightest star visible from anywhere on earth. The only celestial objects that outshine Sirius from our vantage point are the sun, moon, Venus, Jupiter, and on occasion, if atmospheric conditions are right, Mars and Mercury. The Dog Star is found in the constellation Canis Major a.k.a. the Greater Dog.  Depending on what constellation dot-to-dot you’re looking at, this could mark the eye or the tip of the nose.

Our  sun being the closest, Sirius is one of the nearest stars to us at 8.6 light-years distance away. I should mention here that close is a relative term. A light year is approximately 6 trillion miles. Astronomers classify Sirius as an “A” type star, meaning, it’s much hotter than our sun which blazes about 10,000 degrees Fahrenheit. It also has more than twice the mass of the sun while being twice as small. As it produces most of its energy by converting hydrogen into helium through nuclear fusion, the star puts out 26 times as much energy as ol’ Sol, and blazes about 7,000 degrees hotter. 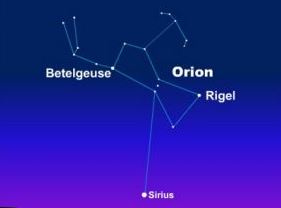 ♦ The name Sirius comes from the Greek meaning searing or scorching. To early Greek astronomers, Sirius dashes across the sky in pursuit of the Hare (the constellation Lepus) under Orion’s feet. Greek mythology has several versions of just what Sirius represents, but most myths say the dog is female. To some, Sirius is Orion’s dog. To others, she’s the watchdog of the heavens who stands guard at the bridge of the Milky Way. There are many more Sirius stories.

♦ To the Ancient Egyptians, Sirius was the revered Nile Star or Star of Isis. As a matter of fact, many Ancient Egyptian deities were associated with it, and for good reason. When the month came that Sirius rose with morning sun, the Egyptians knew the Nile river would soon flood. When it did, the delta would get a fresh layer of silt for their crops and everyone would eat well. When you live on the edge of a desert, this particular gift from the gods was an important one.

♦ The people who study such things say the Great Pyramid of Giza was built in accordance with the Dog Star’s path in the sky. Apparently it lines up and is visible when viewed through one of the shafts.

♦ Ancient Egyptians weren’t the only people celebrating the Dog Star’s path in the heavens. The ancient Greeks, Sumerians, Babylonians, and others, all considered Sirius a sacred apparition in the sky. When it appeared, feasts and assorted celebrations followed. 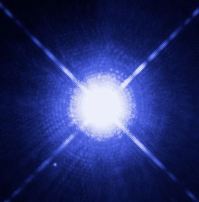 ♦ Hanging near Sirius is an earth-sized dead star (a white dwarf) named the Pup. Once a mighty star in its own right, the Pup is now an ember too faint to be seen without a telescope. This picture taken from the Hubble telescope shows the Pup as a white dot at roughly the 7:00 position. →

♦ Sirius’ celestial dog association has been solidly consistent throughout the classical world. In remote China, the Dog Star was seen as a heavenly wolf.

♦ In a legend from India, Sirius is the dog Svana that belongs to Prince Yudhistira. As the story goes, the prince gathered his brothers and his dog and set out to find the kingdom of heaven. It was a long and arduous journey. One by one, the four brothers dropped by the wayside, but the prince and Svana trudged onward. The pair eventually came to the gates of heaven, but Lord Indra, the gatekeeper, denied the dog entrance. Flabbergasted, Prince Yudhistira told Lord Indra that he could not, would not, forsake his faithful friend and that he would rather not enter himself if that’s the way it was. It was exactly what Lord Indra wanted to hear. He welcomed both through the gates.

♦ In Norse mythology, Sirius is Loki’s Brand or Torch. That figures prominently with Ragnarok.

♦ In the summer months, Sirius sits behind the sun when seen from earth’s northern hemisphere and appears in the east before sunrise. Ancient mystery teachings considered Sirius a sun behind the sun, and therefore, the true source of our sun’s potency. They believed Sirius and the sun worked together to cause hot weather.
😛 And there you go — dog days of summer.

Hump Day Blurb Share
**A promo op for you too!**
http://exquisitequills.blogspot.com/

My 100 things will focus on malapropisms and I’ll stick with it until I can’t find any more. From the French mal a propos (meaning inappropriate). Dictionary.com defines malapropisms as an act or habit of misusing words ridiculously, especially by the confusion of words that are similar in sound.
Here’s one for today:
Last will and tentacle.