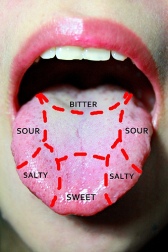 Did you know the average person has around 10,000 taste buds in their mouth and throat? Taste buds are sensory receptors that help form the perception of taste. They first detect chemicals from food in the mouth, then send this sensory information through neurons to the gustatory or taste center of the brain. We have the most active taste buds when we’re children and this declines with age.

My dad and I used to cook together and I’d wonder why his cooking was often so salty in his later years. In his 80s at the time, he couldn’t taste as well as I could.

↑ If you look at this picture, you’ll see the receptors for sweet are right up front. And speaking of sweet… 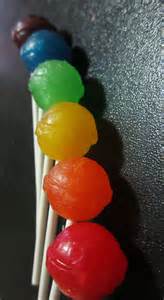 stick to be held in the hand while the candy is licked. From the 18th c. Northern English dialect– lolly for tongue, and pop for strike or slap.

A tongue slap. I had no idea.

Who hasn’t experienced that hard, smooth-as-glass confection? It’s said by people who know such things, that the ancient Chinese, Arabian, and Egyptian cultures all candied fruit and nuts with honey. To make these gooey treats easier to eat, they used sticks to eat them off of. Voila– the oldest version of our common lollipop.  In a version closer to home, I came across a reference that said wealthy nobles in the Middle Ages ate boiled sugar on the end of sticks. This has me wondering where they got the raw ingredients from. The Silk Road perhaps.

The lollipop shows up in literature from the 1800s and usually the references are so small we barely make note of them. For example, Charles Dickens, who grew up in poverty, often  referenced sweet lozenges in his stories. I’m sure they were a treat he longed for as a child but likely never had. Lollipops first appear in the United States in the 1700s but show up in an unusual way just prior to the Civil War. Accounts mention boiled sugar candy stuck on the ends of pencils.

The Industrial Revolution brought automation to many processes heretofore done by hand.  In Wisconsin in1908, the Racine Confectionery Machine Company created the first automated lollipop machine that poured candy onto sticks and made lollipops at a rate of 2,400 lollis per hour. Later on in 1912, a Russian immigrant named Samuel Born invented the Born Sucker Machine that inserted sticks into the candy, a process still used today. In 1916, the City of San Francisco awarded him the keys to the city for his innovative intention. The rest is history. Sweet, sweet history.

*Chupa Chups are the most popular lollipops in the world. The famous logo was designed by Salvadore Dali.

*Dum Dum Suckers were given an easily pronounceable name so even the youngest child could ask for it. Dum Dum’s are known for their Mystery Flavor lollipop. No mystery there. Cleaning machines between batches takes time and money. The Mystery Flavor lollipop is actually two flavors mixing when the end of one batch of candy meets the beginning of the next. Root Beer is my favorite Dum Dum.

*Lollipops are also carriers for medicines. You’d think medicinal lollipops were only for children, but they are also used in the military for their fast delivery of crucial ingredients.

My 100 things will focus on malapropisms and I’ll stick with it until I can’t find any more. From the French mal a propos (meaning inappropriate). Dictionary.com defines malapropisms as an act or habit of misusing words ridiculously, especially by the confusion of words that are similar in sound.
Here’s one for today:
I remember because I have photogenic memory. Photographic