It began with this:

The Oath
You doe swear by custom of confession
That you ne’re made Nuptiall Transgression,
Nor since you were married man and wife,
By household brawles or contentious strife
Or otherwise in bed or boarde,
Offended each other in Deed on in Word
Or in a twelve moneths and a day
Repented not in thought in any way
Or since the Church Clerke said Amen
Wish’t yourselves unmarried agen,
But continue true and in desire,
As when you joyn’d hands in Holy Quire.

And ended after a test…

The Sentence
Since to these conditions without any fear
Of your own accords you doe freely Swear,
A Whole Flitch of Bacon you doe receive,
And bear it away with love and good Leave.
For this is the Custome of Dunmow well known,
Tho’ the pleasure be Ours, the Bacon’s your own.

That odd poem was for Flitch Day. The custom of giving a flitch of bacon (a whole side of a pig) to any married couple who would swear that over the course of a year and a day that neither had broken their marriage vows “either sleeping or waking”.

As the story goes, sometime in the 10th century a lord and lady disguised as common folk approached the Prior at Dunmow Priory in England and asked for his blessing on that, the 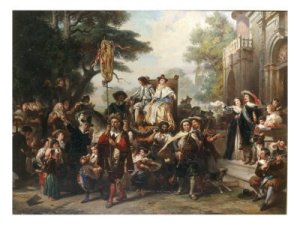 year and a day anniversary of their happy marriage. So impressed by their devotion to one another, the Prior gave the couple his blessings and a side of bacon as a gift.  This wealthy couple in disguise just happened to be well-landed people. So touched by his generous reaction to their love, they gave land to the monks. But their gift came with a quid pro quo. The priory thereafter would offer a side of bacon, or flitch, to any married couple proving harmony and fidelity for the past year and a day after their wedding. In times of shortages, a side of bacon, literally a half hog, was a grand prize indeed.

A council employed on behalf of the Donors of the Bacon, tested each of the couples to learn the truth of their harmonious claim. Whether the couple was granted the flitch or not was dependent upon their findings. These findings would persuade the jury of six bachelors and

six maidens that the couple never wished their marriage dissolved in the past year and a day.

If a couple was found worthy of bringing home the bacon, they would sit in the Flitch Chair and be lifted on their fellows’ shoulders to be paraded through the market square. From there, both husband and wife would kneel on pointed  stones (ouch) and renew their marriage vows. Those couples who did not dazzle a whole flitch out the judges, but whose relationship still had merit, were given a gammon or small end of bacon.

In researching this post, I discovered flitch is mentioned in Chaucer’s Canterbury Tales but few details are given. Those first accounts rarely go into detail when common things are mentioned. Everyone already knows about it so no need to explain. As a teen I found Chaucer hard to understand.

Believe it or not, flitch trials are still held today– once every four years. http://www.dunmowflitchtrials.co.uk/

My 100 things will focus on malapropisms and I’ll stick with it until I can’t find any more. From the French mal a propos (meaning inappropriate). Dictionary.com defines malapropisms as an act or habit of misusing words ridiculously, especially by the confusion of words that are similar in sound.
Here’s one for today:
You could have knocked me over with a fender.