The A to Z Challenge – N for Necropolis Railway #atozchallenge

For me, this year’s alphabet will be about history and historical science– things that tickle my fancy or capture my imagination. I hope you will find them interesting too. Also, if you see words colored blue, those are links to more. There’s always more.

Many years ago when I was a teen I read two books that had a profound effect upon me: Aldo Leopold’s A Sand County Almanac (specifically the story Odyssey) and Jessica Mitford’s The American Way of Death. Two things came out of that reading experience. However my demise went, I’d donate my organs. I wasn’t using them anymore anyway, and if my death meant life to others then what a fine ending to a happy life. I also decided I’d be cremated and my ashes scattered. The physical essence of what I was would be taken up by a tree, flower, or a patch of grass. From there I’d become nourishment and be an active part in the cycle of life.
😉 I did say I’m a writer.

Just about as long as people have walked the earth the business of death has existed. Of course death happens, we live in a linear existence and body clocks just stop ticking. I mean this in the broader sense.  Death is a business. From mummy wrapping to sky burials to mourning attire and elaborate tombs, someone is seeing to it. Someone is specializing. Why? Because humans place value on life. And because of that value, we don’t leave our dead untended on the side of the road. Our cemeteries and older catacombs, ossuaries, and necropolise  are all over the world. I wrote an A to Z post on Necropolis two years ago with ancient burial descriptions. Read here.

As a former Chicagoan, I grew up familiar with the various neighborhood cemeteries. Chicago has some stunners too — elaborate Victorian monument gardens. When Queen Victoria’s beloved husband Albert died, she spent the next 40 years of her life in mourning. From his death and her sadness a fad was born. The fad of mourning.
The Victorians did death in high style. But this wasn’t always the case.

The Cities of the Dead

Just as they did in Chicago, cemeteries generally exist on the edges of a city. When populations grow, those burial grounds get ringed as the city presses outward. It was the same in Queen Victoria’s London. There were still garden burial lands the wealthy could afford. The urban poor were left to something else entirely.

London had it’s share of plagues and pestilence that kept population down through the centuries, but the mid-1800s saw a boom when London’s population grew to more than two million. This overcrowding came with disease, poor sanitation, and an increase in crime. The bulging city pressed outward as one might expect, but church yards were at capacity. At one point coffins were stacked one atop the other in 20-foot shafts. By the 1840s death had become a very sloppy business. Old coffins were dug into while searching for free space and exposed bones littered cemetery lands. The fetid stench of “cadaverous vapours” became a problem with coffins buried so close the surface, as did water contamination. Tappers were employed to drill holes in shallow-buried coffins so they wouldn’t explode. A sloppy business indeed, and it was about to get worse.

Enter Sir Richard Broun and the Age of Steam 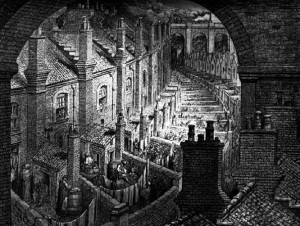 Steam locomotives were relatively new in ‬1848 and considered by many to be nothing more than a novelty. But Waterloo Station had just opened and Broun saw a potential solution to the lack of cemetery space, not to mention the piles of corpses all over London. He found investors and purchased a‭ ‬1,500‭ ‬acre site outside of London and named it Brookwood Cemetery. To get bodies there, he would have a dedicated railway of the dead– a railway whose sole purpose would be transporting the dead from London to‭ his Brookwood Cemetery ‬for burial. He felt this idea was “capable of serving the capital for around‭ ‬350‭ ‬years”. 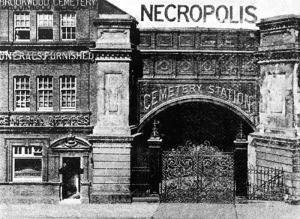 passed creating The London Necropolis and National Mausoleum Company, a name which was later shortened to to The London Necropolis Company. By 1854,‭ ‬Brookwood had its own dedicated platform at Waterloo Station.‭ ‬Just as with living passengers, a timetabled service transported coffins down at night and the mourners by day. They went to one of two stations dependent upon their religious persuasion– ‬the conformist station was on the sunny side‭ and the nonconformist station on the dark side.‭ ‬To keep the wealthy happy, each‭ coffin train‭ ‬was divided into classes to keep the dead poor separate from those socially better but no less dead. ‬

Broun came up with this idea during a cholera epidemic. When the disease passed, the high volume of dead ceased as well. He had initially estimated shipping at least 50,000‭ ‬paid corpses a year‭ and the investors with $$$ in their eyes thought these figures were fantastic. But ‬the actual figure was closer to‭ ‬3,000.‭ ‬

A curious sidebar~ The West Hill Golf Club was located near Brookwoods Cemetery. A golfer would have to pay 8 shillings to go play golf. Golfers soon figured out if they dressed in mourning clothes they could ride first class on the Necropolis Railway for 6 shillings.

A bombing raid in ‬1941‭ ‬Blitz obliterated the Waterloo terminus and the London Necropolis Railway was no more.