The A to Z Challenge – H for Heaven & Hell clubs #atozchallenge

I love writing the Victorian Era for its opulence, decadence, and  inventiveness. Every aspect of that time is loaded with  juicy details. Even the language of the era is marvelous for a writer. From refined gentry to fishmonger, the character possibilities are endless.

The 1870s saw the standards of living rise for the upper and middle classes of Europe and the United States. This financial security was attributed to the Industrial Revolution. Simply put, more industry meant more jobs. There was a lot going on at this time as well. From the opportunities offered by westward expansion and railways in the US, to the bounty of mechanized agriculture and overall stability after the Franco-Prussian War in Europe, the late 1800s was a good time for many. We see advancements of all sorts in this period and they’re revealed in every detail of the time. Mark Twain called his era the Gilded Age. In Europe this was the Belle Époque — the beautiful epoch.

The Nouveau Riche ~ The New Wealth

Successful industrialists, those capitalists, manufacturers, investors, bankers, and employers, made a new social class out of the sudden prosperity. They were the nouveau-riche. Aside from their successful pursuit of money, the bourgeoisie loved to flash the fact they had it. As wealth gave one freedom to relax, how better to show your wealth than having flamboyant pastimes?

Then as today, people were driven to emulate the well-to-do. Leisure was the prize. Even the less affluent craved entertainment and cabarets, bistros, music halls, clubs, and casinos sprung up like mushrooms in the lawn after a rain. Burlesque and provocative stage shows of all kinds were a huge draw. This was the era of Moulin Rouge and the Folies Bergère.  Some of the more interesting hangouts of the Belle Époque where the Parisian Heaven and Hell clubs. 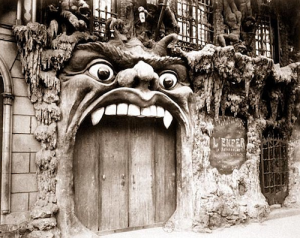 One of the more curious details of the Victorian Era had to do with their preoccupation with death. From long mourning rituals and observances to creepy Memento Mori photography, it didn’t take much coaxing to blend this morbid fascination with entertainment. One such venue was the Cabaret du Néant ~ the Cabaret of Nothingness.

In what was described as a jovial atmosphere of death,

patrons at the macabre Cabaret du Néant were seated at tables made of coffins, drank cocktails named for deadly diseases, and were served by robed monks and funeral attendees. The decor was reminiscent of Dante’s Inferno with devils, bones, and fallen saints. The stage shows were equally nightmarish as spirit mediums’ optical trickery was employed to give various chilling illusions e.g. Satan transforming into a snake, or a body wasting away to a skeleton in seconds.

Here’s a collection of surviving photographs. By the clothing, I’d say some were taken in the early 1900s:

The Belle Époque itself was an illusion. An apt analogy would be a glittering facade over a festering wound. As the Beautiful Epoch passed, the politics became more fractious. Anger and xenophobia grew.  What began after the Franco-Prussian War in 1871 ended with the war to end all wars in 1914. That would be the first world war –WWI. The allure of edgy entertainment found in the Heaven and Hell clubs evaporated when coffins began coming home with soldiers in them.

More~
Insight into the Belle Époque