The A to Z Challenge – G for Ghost Ship #atozchallenge

When I was a child my dad and I had a newspaper ritual. The Chicago Tribune came to my house in the morning and the Daily News arrived early afternoon. On Sundays we’d divide the papers between us — he’d take the front page and car sections and I’d take the “funnies” and the sports page. We’d read our sections quietly then we’d switch. The funnies weren’t only cartoons. Ripley’s Believe it or Not was in there too. I just loved that part. Ripley’s Believe it or Not was about strange or unusual things from all over the world– things like the vulture (Sky) burials of Tibet, ironic headstones like the one belonging to Mrs. Ima Deadman, Fakirs on beds of nails, and potatoes shaped like ducks. I recall reading another that intrigued my young mind — it was about the ghost ship Mary Celeste.

The term ghost ship or phantom ship is used for vessels that have been decommissioned but not yet scrapped. It’s also used for fictional haunted ships such as the Flying Dutchman, and ships found adrift with their entire crew either missing or dead. Of the latter, one such vessel was the Mary Celeste that was found floating 600 miles west of Portugal in December 1872. The fact it was unmanned remains of the greatest maritime mystery of all time.

The story actually begins eleven years earlier when the ship was known as the Amazon, a two-masted brigantine built in Nova Scotia’s Bay of Fundy. With high hopes it launched full of London-bound timber in 1861, but bad luck dogged the ship from the very beginning. Her first captain took sick and died. Her next captain fared better, but had his own string of serious misadventures.  Her third captain took the helm and ran her aground in a storm. The ship was so badly damaged, it became a ship yard wreck in 1867. But the story doesn’t end here.

Shortly after, an American mariner paid bottom dollar for the wrecked Amazon and had her repaired and renamed the Mary Celeste. He planned to be her captain but it didn’t quite go as he planned. His creditors took the merchant vessel and sold her to a consortium of financiers. With the consortium’s investment dollars the Mary Celeste underwent major changes to her size and shipping capabilities. She also gained a new captain for her 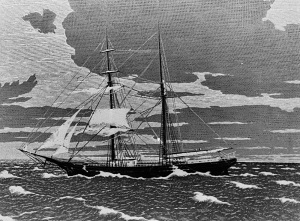 first voyage. He was a seasoned sailor from a seafaring family by the name of Captain Benjamin Briggs.

That October in 1872, Briggs hand-picked his crew — all well-seasoned sailors. In preparation for the first voyage, the Mary Celeste was loaded with six months’ worth of food and water and a cargo of more than 1000 barrels of denatured alcohol. Captain Briggs brought his wife and baby daughter along on this maiden voyage. Along with his small crew, they left New York for Genoa, Italy on November 5th. And here’s where the facts end and mystery takes over.

At the time, another merchant vessel named Dei Gratia left New York within days of the Mary Celeste. En route to Gibraltar, they found the unmanned brigantine mysteriously floating off the shores of Portugal. The cargo, provisions, and valuables were untouched. There was no sign of struggle or fire, but the ship’s papers and captain’s navigational instruments were missing. Just one lifeboat was gone.

Even today people speculate on just what happened to the Mary Celeste and theories go from plausible to bizarre.  As with most unexplainable stories, details got juicier with the telling. Some went so far as to claim the ship was discovered with smoking tobacco in pipes and steaming cups of tea, as if the full ship’s complement just vanished where they stood. Amid the assorted scenarios of foul play that made the news of the day, rumors of insurance fraud, ergot-contaminated flour, was the belief that the crew of the Dei Gratia killed Briggs and crew for the salvage rights the Mary Celeste presented. Even Sir Arthur Conan Doyle had a go at the story.

There were known pirates in the area but the fact the valuables were still on board says no to that theory. There was a small amount of water in the hull but by wooden ship standards, all in all not that much. Was it a storm or did a tornado-like waterspout suck the crew right off the deck? Most of the sails were furled (bundled) and it’s hard to imagine Captain Briggs’ wife and infant child on the deck in a storm. Was it a mutiny? It’s possible I

suppose, but Briggs hand-picked his seven crew members and there was no sign of a struggle. Could something have incited fear of the 1000+ barrels of volatile cargo exploding? A leaky barrel perhaps? That’s the best explanation yet. Or…
One theory suggests aliens took the crew away. Did they?
😉

More~
A wonderful telling of the story of the Mary Celeste

Boy, that tickles my imagination!