The A to Z Challenge – F for Frost Fair #atozchallenge –

Climatologists will tell you we’re in a state of global warming. I won’t get on my soap box and go into the minds who believe the 1% who say “no, it’s a hoax” rather than accept the 99% who say “yes, the data is sound”. I won’t linger on the fuel industry money involved in hyping that 1% and nay-saying the 99% either. I will only say it really makes me angry because it wastes time to fix things before it’s too late. This is my world too. You’d have to be missing a few marbles not to notice the extremes in weather the last few years — from massive hurricanes to drought to the icy polar vortex and everything in between, something’s up.  Some say we have another ice age on the way.

The Summer that Never was

In 1815, the eruption of Mount Tambora in Indonesia brought about significant climate change. The ash rose into the sky and caused global temperatures to drop 33º (0.53ºC). The cooler climate came with disastrous effects on many levels. From 1816 to 1818 summer temperatures never even made it to 40º. Famine struck when crops failed and livestock died. Diseases like cholera and typhus reached epidemic proportions. Seeding the upper atmosphere with sun-blocking ash added another layer of problems. But the planet’s weather had been acting up for years before that volcano blew.

NASA defines the Little Ice Age as a cold period between 1200 and 1850. There were three particularly cold spates back then –one in 1650, again in 1770, and the last in 1850, with intervals of slight warming between. Scientists, climatologists, and historians debate the cause of the Little Ice Age because there was a lot going on at the time and chances are it all factored in somehow. Perhaps they made a perfect storm of contributions.

Various Scientific Opinions on Contributors:
1. This severe change had to do with the weakening of the Gulf Stream in the Atlantic Ocean — a current that drives warm water from the tropical mid-Atlantic to Europe’s western coastline. Weak Gulf Stream = severe weather.

3. Some believe different solar activity played a role. Levels of carbon-14 and beryllium-10 isotopes in trees/wood from this time show low solar activity and a “prolonged sunspot minimum”.  Weaker influence on behalf of the sun = cooler times.

4. Volcanic activity. There were at least 8 substantial eruptions during this time. That’s a lot of ash. Ash in the upper atmosphere =  sunlight blocked from hitting the earth’s surface.

5. Thermohaline Circulation may have played a role. Also called the great ocean conveyor belt, this circulation system maintains the various densities of the seas. Too much fresh water (as in glaciers and polar ice melting) disrupts the salinity of the sea water and as a result, the temperatures are affected. Affect the temperature of the water = effect the weather systems worldwide.

The Frost Fairs. Making the best of a cold situation.

While the Little Ice age was underway, the River Thames would freeze over for two months each winter. With solid ice expanding the acreage of London, entrepreneurs quickly made the best of the temporary space.

It was the winter of 1607-08 that Londoners found the ice so thick on the Thames it not only allowed passage from here to there, people started setting up camp on it. Peddlers of all sorts moved out on the sturdy ice from fruit-sellers to shoemakers, to barbershops and pubs. With all this open “ground” they even held soccer and bowling matches. 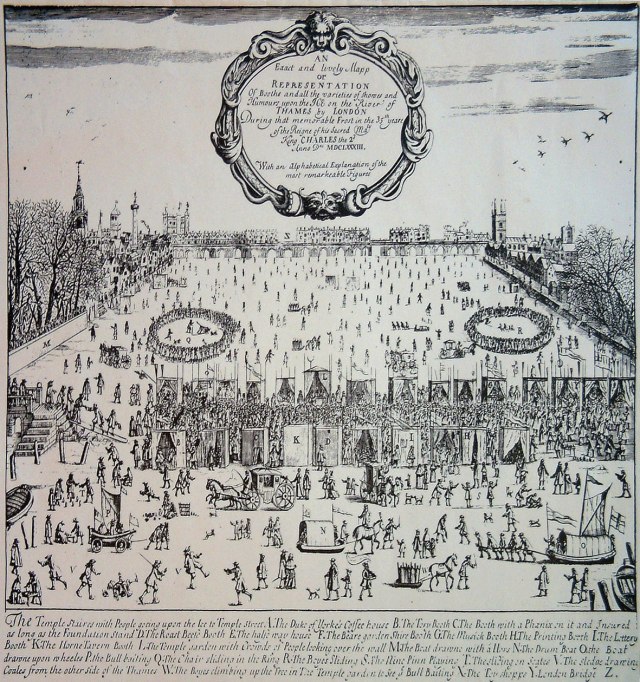 During what was called the Great Winter of 1683-84, even the seas of southern Britain were frozen solid to two miles out from shore. It was here where the most famous frost fair was held ~ The Blanket Fair. English writer John Evelyn described the icy phenomena in extensive detail (gotta love old English spellings):

Coaches plied from Westminster to the Temple, and from several other staires to and fro, as in the streetes, sliding with skeetes, a bull-baiting, horse and coach races, puppet plays and interludes, cookes, tipling and other lewd places, so that it seemed a bacchanalian triumph or carnival on the water, whilst it was a severe judgement on the land, the trees not onely splitting as if lightning-struck, but men and cattle perishing in divers[e] places, and the very seas so lock’d up with ice, that no vessels could stir out or come in.

By the 1800s the climate began to warm. The frost fairs continued. Needless to say, some lost their lives on the thinner ice.

Very interesting – from the BBC

When winter really was winter: the last of the London Frost Fairs

Tomorrow~ Join me on my satellite blog  http://calliopeswritingtablet.blogspot.com/
Authors’ lives outside of the books we write are often as interesting as the worlds we create. One of the more unusual things my husband and I have done was lead wild foods programs for Chicago’s Field Museum. For this 10-day event I’ll be sharing my recipes. I hope you stop by. There are lots of prizes and you might have delicious and useful ingredients waiting in your backyard. 🙂