My recent foray into the document folder turned up bits of writing from one of my favorite blog events from Aprils past –the A to Z Challenge. They’re pretty interesting, if I do say so myself. I’ll be sharing a few until life quiets down around here. I hope you enjoy. Scroll back to read earlier From The Stacks posts.
😀

Sometime in the mid-1990’s my husband and I went to a public presentation at the Fermi National Accelerator Laboratory (a.k.a. Fermilab). Before CERN, Fermilab’s accelerator was the place to be for experiments on particle physics. (I did say I was a nerd) Researchers from around the world work there and to keep everyone happy and entertained in the off hours, they have guest speakers and concerts. This particular guest speaker was talking about something extraordinary. Climate change melting the 20-mile thick ancient ice off portions of the Alps had uncovered a prehistoric man who’d been buried in glacial ice for millennia. And he had his prehistoric clothing and tools with him! 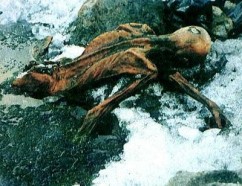 It all started when a pair of hikers walked the Alpine Italian-Austrian border that geographically divides the Alps and got more than an outing when they stumbled upon the mummified body of an ancient man in an exposed gully bed. At first the pair didn’t know what to think. Was this a missing hiker? Ice bodies do turn up from time to time. The snowy Alps can be a rough place. Even Napoleon’s frozen soldiers turn up on occasion. When authorities were called on the scene, they knew they had something different. Recent ice bodies, those lost in the last several years or so, go through this weird process where fat from inside the body somehow ends up on the outside. This body was freeze-dried. It didn’t have that typical lumpy coating of fat found on more recent ice bodies. Sure enough, they discovered this guy was old. 5,300 years-old, in fact. He came from the late Neolithic or early Chalcolithic period (Copper Age).

Nicknamed Ötzi, he would become the most 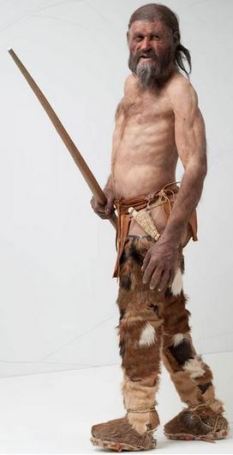 thoroughly studied mummy ever found. Through intense scrutiny, scientists have pieced together an astoundingly complete view of this man’s world and his final hours in it. The image shown here was built upon physical data collected by CT scans.

Here’s a brief idea of what they’ve learned since I first heard about him back in the 1990’s.

I for Infinity Mushroom.

Writers understand a fundamental truth — that next creative spark often comes from something that has captured the imagination. The impetus could be something simple like a color, texture, or scent. It could come from a song, a breeze, or materialize out of a conversation with friends. My mind is like that warehouse scene at the end of the first Indiana Jones movie. I never know what my brain will want to store away for later. I love to learn things and often add such imaginative seeds to my stories. I’m a complex collector. What’s more, I have a very good sense of wonder… if I do say so myself. 🙂 Out of all the weird pieces of information shelved in my head, this one has to be one of the oddest. But in its oddness, it makes sense. Judge for yourself.

According to the Centers for Disease Control, we have 287 toxic chemicals in our body — 180 cause cancer in humans, 217 are toxic to the brain and nervous system, and 208 cause birth defects. From pesticides to preservatives, we’re loaded. When we die, our bodies release this garbage into the environment where it continues to pass on its nastiness to the soil, the things growing in the soil, the creatures eating those things grown in the soil and the ground water.

Enter visionary Jae Rhim Lee. Lee is training fungi to consume her own body tissue. Small amounts of skin, hair, nails, blood, bone, fat, tears, urine, feces, and sweat have been put in petri dishes and mushroom cultures grown on them. Why? To create mushrooms that can be used in what’s called Decompiculture — in other words, using mushrooms to decompose the human body quickly, rather than allowing those hazardous chemicals stored in the body, and the extra toxins from embalming, to leach into the ground.

I think it’s a grand idea. It’s also a great spark for that next sci-fi or horror novel. 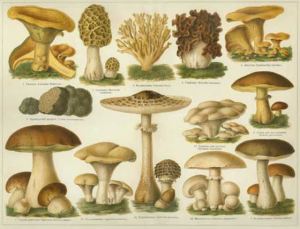 Mushrooms might very well clean up our act on the planet. Mycologist Paul Stamets is a leading researcher on the use of mushrooms in bioremediation (the use of microorganisms like fungi to clean up pollutants). He says they can break down even the most stubborn pollutants like oil spills. He’s figured out that fungi transform contaminants into benign carbon dioxide and water, and that common wood-decay fungi, the ones that grow on trees, are particularly good at breaking down the toxic components of petroleum. And after that work is done, the mushrooms are edible!

Authors, just so you know, the Decompiculture mushrooms are edible too. Now there’s a novel in the making. Stephan King might have a go. (Paul DeLancey, if you’re reading today’s blog, I thought of your murder series when I posted this. 🙂 )

The Infinity Burial Project and the Infinity Mushroom:
http://infinityburialproject.com/

Romance Books ‘4’ Us ~
Our March contest is starting soon.
Authors~ check out our promo services. 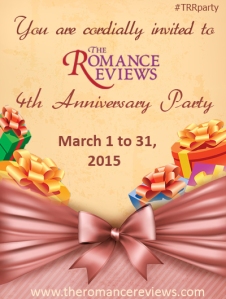 Rose Anderson is an award-winning author and dilettante who loves great conversation and delights in discovering interesting things to weave into stories. Rose also writes under the pen name Madeline Archer.
View all posts by ~RoseAnderson →
This entry was posted in Past Posts - you'll never know what you'll find and tagged A to Z Challenge, Ötzi the Ice man, Decompiculture, infinity mushroom, Romance, romance novels, Rose Anderson. Bookmark the permalink.

1 Response to From the Stacks 9