Cupid, draw back your bow… 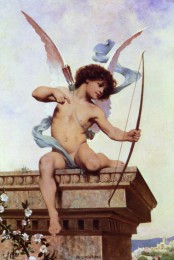 When I met the love of my life, it was literally love at first sight for us both. We had different life plans at the time. I wasn’t looking, he wasn’t looking. He had just returned from hitchhiking cross-country (back when everyone was doing it and no one considered it unsafe), and was settling into life as a journalism student. I was one semester away from leaving Chicago for an art scholarship out west.

But Cupid had other plans. His arrow struck us both and it was totally unexpected. It was life-changing. It was fate. True love is like that. Because of what we experienced, I always write that love into my romances. Readers often comment on the realistic love they read between my characters. I write that emotion from life. It’s what I know.
😀

With Valentine’s Day around the corner, today I’m giving a nod to that rascally cherub who blindsided us and set our feet on a completely different path.

Depending on which mythology you ascribe to, this pudgy little deity has different parents. To the Romans, Cupid is the immortal son of Venus (Aphrodite) and Mars (Ares) – an allegorical blending of love and war. His name comes from the Latin word cupido meaning desire.

To the Orphic and Greek philosophers, he was Eros the son of Nyx the Night and Boreas the North Wind – the first complete manifestation of Divinity. In other depictions, Cupid is considered a primordial god or proto-god e.g. an old one who came before Zeus and even before Zeus’ grandparents Gaia and Uranus. No matter what sidebars exist for this immortal, from the very beginning, even before the fabric of the universe was woven, Cupid personified love and passion. Fertility cults, and other things, rose in his honor.

He wasn’t always depicted as the cute pudgy baby with wings either. There’s a story that says Venus complained that her son grew no bigger than a child. Venus was told by Themis, a prophetic Titan goddess, that if Cupid had a brother he would soon start to grow. Sure enough, Cupid immediately gained size and strength after his brother Anteros was born. Some tales have him older or with multiple heads, four eyes, and various animal attributes.

In other mythic versions, Cupid is blindfolded, and only the truest hearts will draw his blindly shot arrows. Those arrows have a little known detail that always gets overlooked as Valentine’s Day approaches. He carries two arrows in his quiver – one of love and another of hate. Think about that. Those strong emotions really are two sides to the same coin.

Those two arrows make him a symbol of the uniting powers of emotion. Cupid is the bringer of order and harmony to the universe. Because of the love/hate duality involved, some mythic tales make him a fundamental contributor in the formation of the world. Another story has him fall in love with a mortal woman named Psyche. I find this interesting because Cupid is synonymous with love and Psyche is the personification of the soul. One could infer the lesson here is love is essential to one’s soul. Who knew Cupid was such a multifaceted little amorino?

I can see Cupid in my mind’s eye… his arrow notched on his bow. He doesn’t care if the timing is right or wrong for you. He doesn’t care if you’re looking for love or not. Tucked behind a tree or rock, he’s poised to let his charmed arrow fly at just the right moment.  When it hits, it’s totally unanticipated. It’s fate. Sometimes love is like that. Sometimes it waits in unexpected places.

More~
Thomas Bulfinch was my early introduction to the myths and I just loved it. Read about Cupid and Psyche in his The Age of Fable or Stories of Gods and Heroes.

The phrase for today is ~Love is blind

We understand this phrase as meaning when we’re in love we never see the other person’s flaws that are so apparent to everyone else. Curiously, there is scientific research supporting the love is blind concept. Feelings of love suppress those areas of the brain controlling critical thought. Fun stuff. I was certainly knocked for a loop when I fell in love. Neither of us could concentrate.

The first time this expression shows up in print is around 1400 in Jeffrey Chaucer’s Merchant’s Tale where he alludes to love being a nighttime thing and not in the bright light of day. Again this might have to do with seeing flaws in full sunlight. Shakespeare takes this and makes it the recognizable form we know today. In his The Merchant Of Venice the bard wrote this bit where Jessica is disguised as a boy to escape her father:

I am glad ’tis night, you do not look on me,
For I am much ashamed of my exchange:
But love is blind and lovers cannot see
The pretty follies that themselves commit;
For if they could, Cupid himself would blush
To see me thus transformed to a boy.

2 Responses to Cupid, draw back your bow…