Astronomy is old. Even the name is old. It comes from the Greek and literally means star accounting. People have been looking up at the sky since the dawn of mankind, and people have tried to explain what they were seeing for just as long. Then as now people will have their interests.
The earliest astronomers were most likely priests whose interest drove them to study the procession of celestial bodies and draw correlation to what night sky wonders were visible during which seasons. This was necessary to determine animal migrations for hunting and later for planting cycles. Knowing also played a huge role in when to have celebrations.

I had planned to have a Geminid Meteor Shower gathering tonight. Alas, the weather is not cooperating. Now I’m planning a quiet evening at home working on presents. 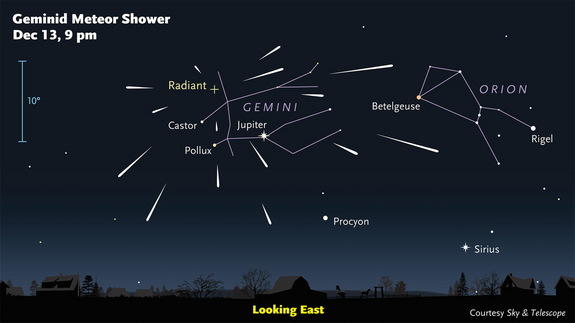 The Geminds are always a good show and worth your time if you enjoy such things. The shooting stars come out of the section of sky where the constellation Gemini hangs.  For years this particular shower was considered a mystery because astronomers didn’t know where this space debris was coming from. Showers are normally tied to comets but there were no orbiting comets in this portion of the sky. In 1983 a rapidly moving asteroid was discovered in that section and it really got astronomers excited. For the first time since man looked toward the heavens an asteroid had been definitely linked to a meteor shower. I just love science nerds.  🙂

So while I won’t be partying with family and friends under the stars tonight, perhaps you can. It peaks tonight and goes into the predawn hours of Sunday morning until sunlight blocks it from view. This is a very active meteor shower because the space debris hits the earth sideways. If debris comes in the from the side instead of head-on, we get to see long slashes of light as it burns up in earth’s atmosphere. NASA is predicting between 100 and 120 meteors per hour in rural areas. Now that’s a good show. Make a wish!

As mentioned earlier this month, my husband and I are building a vintage postcard scrapbook — one postcard at a time. The album covers 100 years from 1860 to 1960 and has many slots yet to be filled. In the spirit of the season from now until New Year’s Day, I’ll share cards from my collection. Scroll down to see previous posts. Subscribe to get them in your inbox!

No holiday postcard collection is complete without a Krampus, but boy are they hard to find. Never heard of the Christmas devil? Here’s more:
http://news.nationalgeographic.com-krampus

🙂 Come back tomorrow for more Krampus!

And while you’re there, sample my scorching love stories for free too!