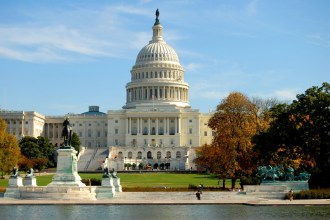 We were in DC this past October. This was our second trip to DC and certainly the lesser of the two. I must say the first in 2012 was stunning — the monuments, the museums, the century trees and architecture, the hallowed ground, even the railway system. I have never missed voting in an election large or small. Call it a promise made to those who fought to give me the right.
In our first trip to DC in 2012, I finally felt the point of it all.

Ours is a Democratic Republic and as such our country was modeled after the ancients. From Rome we built a republic — that power rests in the body of voting citizens and exercised by representatives they’ve chosen. Like them, we emphasized secular, individualistic, and critical thought. From Greece we built a democracy — a government without divisions of class where the supreme power is vested in the people and their free electoral system.  Like them, we had a say in our governing. Our founding vision was secular because that was the modern thought of the time of Enlightenment the founders lived in. Their history up to that point had more than enough Inquisitions and wars over ideology.

America was the tabula rasa — the blank slate with 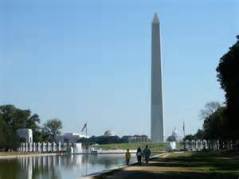 which to do better. Anyone, pundits and politicians alike, who say otherwise does not understand the history of the period nor the minds of the men who framed this great experiment. They’re simply wrong.  For all the garbage we inexplicably endure from our representatives, for all the perplexing numbskulls and soulless creatures voted into office, for all the dirty money and partisan BS games, for all the sneaky riders and paperclips attaching nonsense or graft to important legislation, you can’t fault the perfect dream for humanity that came out of the time of the Enlightenment.

The whole project was designed from the beginning to have wiggle room. The founders knew it had flaws but they were picking their battles. Battle one was get the country formed first. Battle two was keeping the country together through the Civil War. After, we’d finally get busy living as men should under the auspices of free will. There were still flaws and prejudices to overcome. We’re still mired in leftover muck. Nothing like this had ever been done before and so they could only make educated guesses as to how it would go. But the founders in their brilliance designed our government to be fluid that it might adapt as we matured.

The trappings of Washington DC embody the Humanist vision for this country. Were you to go there with an understanding of the ideals of the Enlightenment and a smattering of knowledge of the Renaissance and the Reformation, this all make perfect sense. You discover this never-before break with king and tradition was a hopeful foothold for the future of humanity. I think that absolutely amazing and I’d really like us to get back on board.

Goodness, what a cup of coffee stirs from the mind on a rainy morning. 🙂

Like I said, the second trip to DC was the lesser of the two. We had grand plans to hit the Library of Congress (where I just happen to have books) and the research rooms of the National Archives. Sadly, through a scheduling snafu, my husband went one way and I went another. It was never our intent that I spend the entire day walking the nation’s capitol alone but that’s what happened. 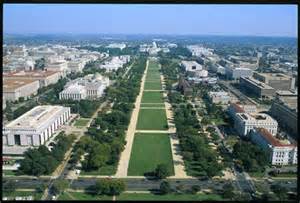 Crews were doing work on the lawn between the Capitol Dome and the Lincoln Memorial. This is where all the crowds go for various events there and the grass really gets beaten down. I asked a docent at one of the museums and was told they were installing in-ground sprinklers.  Great idea. But. The entire lawn was fenced off including all those handy crosswalks, meaning I had to walk blocks instead of yards to get from the various museums with their different opening times.  Many, many blocks, all told. Good god my feet hurt at the end of the day. You can rent a bike to get you from here to there, but once you get to wherever there is, you’ll find no place to dock it. Not good to leave it leaning up against a tree when you’re monetarily responsible for its return.  So I walked…and walked.  We never did get to do our research. So disappointing. 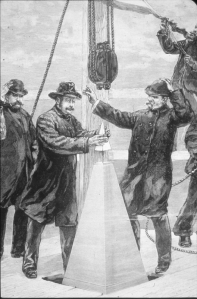 I bring all this up today because this date in history is important to that giant obelisk on the mall. On December 6, 1884 an aluminum capstone was set atop the Washington Monument in Washington, DC. Aluminum was a very big deal at the time. Here’s more:
http://www.tms.org/pubs/journals/JOM/9511/Binczewski-9511.html
Why Aluminum?
http://findersfree.com/science-nature/aluminum-considered-valuable-gold 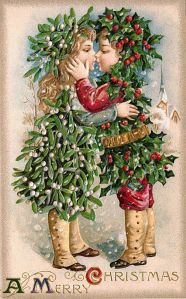 As mentioned earlier this week, my husband and I are building a vintage postcard scrapbook — one postcard at a time. The album covers 100 years from 1860 to 1960 and has many slots yet to be filled. In the spirit of the season from now until New Year’s Day, I’ll share cards from my collection. Scroll down to see previous posts. Subscribe to get them in your inbox!

Here’s a cute meeting of the holly and the ivy. It’s a vibrant lithograph. I love the buttoned gaiters on their legs. Undated.

My 4th of the month post is still up at Romance Books ‘4’ Us. Here’s the direct link: http://romancebooks4us.blogspot.com/2014/12/oh-those-family-traditions-by-rose.html

Find my novels wherever books are sold.
Sample for free!

1 Response to Worth mentioning ~