If you have yet to read about the cloud of mayflies in Wisconsin this week, the swarm was large and dense enough to be seen on radar! I can’t even begin to guess the number that all hatched at once. Mayflies live only long enough to mate and lay eggs. They don’t even have a usable mouth to eat with.

This reminds me of our last trek into the Canadian wilderness. The closer we got to the border, the more we began to notice large tracts of completely or partially defoliated trees.  Driving through a Minnesota border town, we encountered caterpillars so thick on the roads, at one intersection we actually skidded on their fleshy bodies when we stopped at the stop sign. That’s a LOT of caterpillars. The area was going through a cyclical emergence of the things and they were eating just about every leaf in sight. After, we learned they were called army worms because they move en mass from tree to tree. I recall they were bluish and a little longer than an inch. I also remember how icky it was to skid on their over-abundance on the road.

Two days into our canoe trip, we were on a particularly grueling portage with our canoes and several 80lb Duluth packs to carry on our backs. Portages, some as old as the ancient natives who lived their first, are footpaths that connect lakes or a lake to a river. To travel the many lakes in the wilderness, you pick up your gear and canoe, and hoof it across. These aren’t paved paths either. Some go through marshy areas where people have laid down treacherous log roads to walk on. Some go around gigantic boulders and over small mountains of cobble. Some wind and the forest echoes with the sound of canoes banging into trees on the turns.  Let’s just say the vast northern wilderness is not for the low-stamina individual.

This particular portage was extremely hard

but that meant less people would be on the wilder lake we were headed to. Less people = more animals. And who doesn’t want to see moose and bear and hear wolves and cougar? Portages can be rough on heavily-laden hikers. My own adult daughter sustained a pretty bad sprain half-way through that trip. She twisted her ankle over cobble and went down with a 70lb food pack on her back. She weathered it like a trooper and I was beside myself with worry that she tore something in her ankle the whole time. 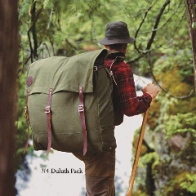 So anyway…There I was with my 80lb pack on my back trudging over rough ground. I remember there were a lot of flies. So many, I stopped to rest against a boulder and put my head net on. The wilderness is full of insects. Mosquitoes that bite your face and hands and biting black flies that make you want to stampede like elk, and the occasional cloud of midges you hold your breath to walk through. Add ticks to this party. All together they can make for a very unpleasant trip unless you spray up with bug spray. Spring and summer have way more than their fair share of these pests. September, my favorite cold month to go to the wilderness, has hardly any.

Getting to the end of that portage about 11:00 that early

July morning, I saw the splotchy white t-shirt one of the guys in our group and thought to myself he must have fallen. Drawing closer, I was horrified. His back was covered in flies — covered like this bee man from Ripley’s Believe it or Not. →
What’s more, the flies didn’t give a fig about bug spray. They came to settle on everything and on some camp sites we even had to take care while eating lest you eat one. We lived with these flies for roughly ten days, then one day they were just gone. Completely gone.

Here’s what happened~ Outbreaks of those defoliating caterpillars typically occur every 10 to 15 years and persist for two to three years. The grand emergence of these army worms triggered high numbers of flies. These are considered friendly flies. They lay their egg inside the body of the caterpillar and the larva grows eating that host from the inside out, a living tomb if you will, hence the name sarcophagus fly. Nature is amazing. Next time I’ll go in September.

For 100 days, I’ll post something from my chosen topic: Clichés.
There are 61 entries to come.

A fly in the ointment