I love fairy tales. Even the name evokes a sense of fancy. What are they exactly? Merriam-Webster says this:

Well, that opens the field right up!

If you come to my blog regularly, you’ll know I’m a huge fan of metaphor and symbolism. I enjoy stretching my mind and imagination. Like parables, there are many messages hidden in our childhood nursery rhymes, fables, and fairy tales. That was the point of Aesop’s Fables, and it’s certainly the point  of Heinrich Hoffmann’s nightmare-inducing 1845 children’s book Struwwelpeter

Long before the internet came into being, I recall reading examples. One such tale was The Old Woman Who Lived in a Shoe as a reference to Queen Victoria and the fragmentation of the British Empire. It sort of makes sense. At one time the sun literally never set on the British Empire. When your holdings are spread around the world like so many children, she (the Queen) didn’t know what to do. Another was a reference to L. Frank Baum’s The Wonderful Wizard of Oz as having been written as a parable about populism. The Tin Man sort of hints at the dehumanized industrial worker of the 1900’s. That yellow brick road can certainly be a reference to the common image of America the immigrants of that era sought — the streets are paved with gold.

By the time Jakob and Wilhelm Grimm were born in the late 1700’s, the era of Sturm and Drang was drawing to a close. Sturm and Drang or Storm and Drive put emotion back into thought. Previously, the Enlightenment stripped all that away and rational, scientific thought prevailed. You might say Sturm and Drang was the counter culture of the time. On the heels of Sturm and Drang came Romantism –a celebration of intense emotion, and here we get a real feel for the minds of the Brothers Grimm.

With their keen interest in German folklore, Jakob and Wilhelm traveled extensively and everywhere they went, they collected the local stories. Much of what they found had threads of truth woven in. What’s more, most were cautionary tales filled with extreme violence. I’ve read several original versions of these fairy tales. Holy cow. I wouldn’t read them to a child. Example: Snow White dies in the end and her body is carted off by the prince and his men for a night of necrophilia. I have links to several holy cow examples below.

The Grimm’s Fairytale The Pied Piper of 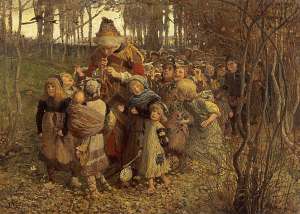 Hamelin tells the story of a rat catcher who’s hired to rid the town of rats. He’s successful but the greedy towns people refuse to pay as promised. What else is he to do but return and lure the children away. It’s said the brothers drew upon 11 different versions of this story to make their own.

Believe it or not, this tale is based on an actual occurrence in 1284 in which most of the children in Hamelin disappeared. I came across many references to the whys and wherefores of how such a thing happened — a death metaphor for children dying from bubonic plague or other childhood disease, or a disease called Huntington’s chorea that makes people dance (as in the medieval Danse Macabre). I even came across one reference that says the kids went on a crusade to defend Christendom and never returned. The earliest reference is quite disturbing:

In the year of 1284, on the day of Saints John and Paul on June 26, by a piper, clothed in many kinds of colours, 130 children born in Hamelin were seduced, and lost at the place of execution near the koppen.

Jeeze. How do you make a fairytale out of that??

Just so you know, today is Rat Catcher Day. Keep your kids inside.

The Grimm Truth About Your Favorite Fairy tales

The Dark Side of the Grimm Fairy Tales

For 100 days, I’ll post something from my chosen topic: Clichés.
There are 63 entries to come.

12 Responses to Pay the piper