The profession of hope

One Saturday several years back, my husband and I went for an early breakfast in town. Coming home down our back-country road, he saw something in his side view mirror. Suddenly pulling over, he said, “You’re going to enjoy this.” A few seconds later an old tractor passed us by. Spiffed up and shining, it had a sign on it declaring it was on a Tractor Trek. Another tractor followed, this one with a sign that said the make and year. We sat and watched about 70 vintage tractors go by, the oldest from 1938.  I did enjoy that parade of farm machinery. I love parades even more than I love historic details.

Years passed and we didn’t see the Tractor Trek again. To my delight, this spring, the local township bulletin gave us advanced notice about the route. Social butterfly I, I decided to invite friends to watch and share breakfast after.  I woke early to cook pancakes and bacon, then we drove to the optimum spot to watch and parked off road. We sat in our chairs and sipped our coffee while we waited.

came rumbling 20mph down an old railroad berm, a now trackless right-of-way from days gone by. Our seating directly across gave us a perfect up close and personal view of these old and steady machines as they turned the corner for the first part of their 50 mile trek.

Like the last time, nearly all were spiffed up and shining. Others were sun-faded. The oldest were mostly red with names of the company that built them — Allis-Chalmers, Ford, Ferguson, Champion, Massey Harris, John Deere, plus other names I didn’t recognize. I saw single names on one tractor and combined names on the next suggesting these old companies merged or disappeared when more aggressive marketing took over. 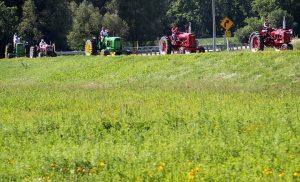 Side by side, the 1930’s, 40’s, 50’s, 60’s machines were dwarfed by the few models of the 1970’s. Some of the 1940’s, 50’s, and60’s tractors had hubs jutting out from the side. I don’t know what they’re called but I do know what they’re for. A few well-placed belts could relay power from the tractor to run another machine. Some tractors had awnings to offer some shade. I saw another with a patio umbrella that collapsed — 50 miles in the hot sun wasn’t going to be fun for that guy. One tractor had a rumble seat reminiscent of a queen seat on a motorcycle. It was occupied by the farmer’s wife. That had me wondering the purpose of it. For company?

A lag occurred after the first 20 or so tractors went by. One of the organizers pulled up in his truck and waited with us in the shade. The 20 or so farmers farmers climbed down from their seats and chatted with one another while they waited on the other drivers to catch up.

The organizer explained how often people complain when the trek crosses the main roads or drives those roads for a time until they meet up with another back road route. When you’re doing a speed of 20mph or so, it’s important to keep the trekkers together. The farmers endure obnoxious drivers who shout obscenities  and flash rude gestures. I mean really, is that necessary over a few minutes of your time? Just pull over and watch history as it passes you. We’ve lost the awareness that begins on the family farm and ends on the dinner table. Because our food comes neatly packaged from agra-biz and feedlot, people fail to see the connections.

the field. Weather being the unpredictable thing it is, some of those years will be bad ones. These grand old implements were the farm family’s great hope and you could see it reflected in the obvious care and upkeep that paraded by this past Saturday. Farming has always been a profession of Hope. With their new tractor they might plow that extra acreage and make enough money for better drainage, get the new barn roof, or even send their kids to college. Tractors brought hope for the future.

The United Nations (UN) has dedicated 2014 as the International Year of Family Farming. The idea behind it is to highlight just how important family farming is in feeding the world and assuring food security. After decades of failed attempts to eradicate hunger, governments, development agencies, research institutions, etc, see family farming as necessary to alleviate global poverty and hunger.

For 100 days, I’ll post something from my chosen topic: Clichés.
There are 64 entries to come.

The July contest is on. Come see! http://www.romancebooks4us.com

3 Responses to The profession of hope