The fuse to the powder keg 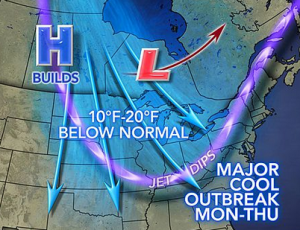 Unbelievable but true — the polar vortex is back. It doesn’t bother me half as much as it did during 2013-14 also known as the longest winter of my life. I think it safe to say people have watched the weather since people first walked the earth. As we never want to be out in bad conditions, it’s important to know what’s what to the best of your ability. Weather can influence many things for the good or bad.

Notable weather watchers
Jean-Baptiste Colbert, Minister of Finance to Louis XIV urged the construction of the Paris Astronomical Observatory.  The idea behind it was to facilitate global exploration by studying weather. Completed in 1671, this Observatory has been keeping track of weather a long time. Here are some particularly interesting details of weather recorded in France in the late 1780’s:

April to July 1788~
The  growing season that year saw a ridge of high pressure throughout the region and with it a hot and dry period of drought. I should note that at this time the French peasant farmers were still farming using the same poor practices in use during the Middle

Ages. Crop production was looking pretty bleak. By mid-July, the harvest of the meager corn had begun. (corn in this case was barley, oats, wheat, or rye).

The Paris Astronomical Observatory recorded that a devastating thunderstorm passed through the region. An observer to the day was Lord Dorset, the British Ambassador to France. Here’s what he had to say:

“About 9 o’clock in the morning, the darkness at Paris was very great… The hailstones that fell were of a size and weight never heard of before in this country, some of them measuring sixteen inches … and in some places even larger. Two men were found dead upon the road … all the corn and vines destroyed, windows broken and even houses beaten down … It is confidently said that from four to five hundred villages are reduced to such great distress the inhabitants must unavoidably perish”.

I should add here that at this time 90% of the population of France was trapped in a feudal system that required them to pay dues to the nobility and the Church. If they went hungry doing it, so be it. It didn’t help that King Louis XVI and his wife, Marie Antoinette, and the rest of the French nobility they rubbed elbows with, continued living their lavish lifestyles.  It also didn’t help  that France had already bled the populace dry from supplying the Seven Years’ War and the American Revolution. A side note: Marie Antoinette never said, “Let them eat cake” upon learning the peasants had no bread.  The phrase most likely came from the mind of Jean-Jacques Rousseau the philosopher.

Winter 1788-89~
That following winter was one of the harshest winters ever recorded in Europe. Thomas 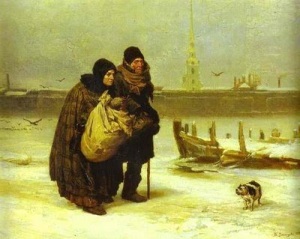 Jefferson, the American minister to Paris at the time, wrote this:

“there came a winter of such severe cold as without example … the mercury was at times 50 F below freezing … Great fires at all the cross roads around which the people gathered in crowds to avoid perishing with cold”.

Spring and summer 1789~
Food was scarce that spring and the high cost of what was available created panic throughout the population. Riots were common — 300 between April and July. This time came to be called “the Great Fear of 1789”. The  stark reality of starvation melded with the seething resentment of the uncaring nobility. It lit a fuse on a powder keg that July.

The angry mob
On the morning of July 14, an angry peasant

mob stormed the Bastille. At first they were met with canon and artillery fire, but after several hours of this cooler heads prevailed. They organized and united and called themselves the National Constituent Assembly. They seized the weapons there and use them on the king’s soldiers. The storming of the Bastille was the beginning of the Reign of Terror. In the ten years that followed, thousands died by the expedient killing machine — the guillotine.

A macabre addition to this tale~
Following the executions of the aristocracy and insanity of the Reign of Terror, the bourgeois population made light of it all. Women cut their hair short (as was done to those getting their heads chopped off) and everywhere people tied red ribbons around their throats and on their clothing to commemorate and trivialize that violence. The Victim Ball was a popular party theme conceived by those in mourning for headless friends and family. They often consisted of funeral-style banquets served on top of a coffins and dished up on black dishes.  Weird stuff.

For 100 days, I’ll post something from my chosen topic: Clichés.
There are 71 entries to come.

8 Responses to The fuse to the powder keg