Take the world by storm

So the Greek weather gods have left our area alone for a few days. Their focus has been elsewhere, namely creating Hurricane Arthur.

Hurricanes, cyclones, and typhoons are all the same weather phenomenon, by the way. Their differing names have to do with the location in which these storms occur. Cyclones occur in the South Pacific and Indian Ocean. In the Atlantic and the Pacific Northeast, hurricane is used. The same storm in the Northwest Pacific would be called a typhoon.

I’ve mentioned I have tornado anxiety — too much water under my bridge and too active an imagination thrown in to magnify the angst. Tornadoes just appear. A bad storm rolls in boom — conditions are ripe for one. Hurricanes don’t have the same effect on me. Perhaps it’s because they build slowly. A hurricane gives you time to batten your hatches. Tornadoes are rude by comparison. 😉

As incongruous as this next bit might sound, in light of all I’ve said, I would love to stand on the beach as a hurricane nears. No, I’m not looking to get the full blast when it makes landfall, I have no desire to be swept out to sea in the storm surge. I just want to feel the energy of it for a bit before I run for cover. I am an ion junkie. 😀

In keeping with the theme of weather gods, those Theoi Meteoroi. Who might be responsible for such a storm as Hurricane Arthur?  This god’s name gives a clue — Typhon.

Remember in several posts past, I mentioned the ugly children of Gaea (Mother Earth), forced by their father Uranus to go back to the cave womb from which they sprang? Well, Gaea had other children beside those giant Hecatoncheires and their beautiful siblings the Titans. But who was around to father them?

As Hesiod writes in his Theogony, the first entities that came into existence were :

After these, a few more came on the scene:

I find it interesting that the dark and light are dualistic entities. Erebus for example is male and Nyx is female. The same for Aether and Hemera. 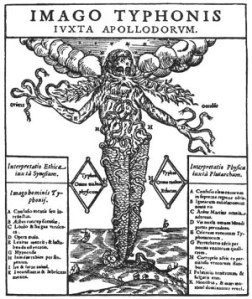 In what could only have been a whirlwind romance (I crack me up), Gaia the earth had a son fathered by Tartarus the bottomless storm pit.  Their son was the monster named Typhon. According to the myths, fire-eyed Typhon was so tall his head touched the stars. He had the torso of a man, but his legs were enormous coiling snakes that writhed and hissed as he walked. His hands consisted of 100 deadly serpents and his head was host to 100 more. Odder still, each snake screamed the cries of various animals. He also had hundreds of wings covering his body. Yeah, that’s a monster.

Other versions of the Typhon story have him as the son of Hera. A son conceived without a father. That’s enough for today.

If you haven’t had a chance to see my post on Romance Books ‘4’ Us
yesterday, do stop by. 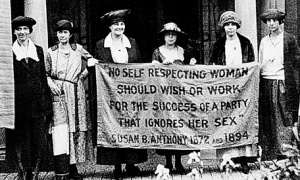 For 100 days, I’ll post something from my chosen topic: Clichés. There are 74 entries to come.

Here’s a cliché for today:
To take the world by storm

We’re running a little behind schedule but our July contest is coming soon! http://www.romancebooks4us.com

And today on our busy Exquisite Quills blog  ~ an interview with Author Stacy Juba
http://exquisitequills.blogspot.com/

3 Responses to Take the world by storm