I began this short weather deity series to coincide with lousy weather. We’ve managed to dodge more than one storm on the radar over the last few days so I’m hanging out my rainbow and putting away my umbrella.

I’ve decided to continue discussing ancient gods and goddesses who were said to influence the weather. Who knows where my interest will take me. If you’re here for the first time, the plan is to blog the weather gods of many religions. I’ve started my series with the Theoi Meteoroi — the weather gods of Ancient Greece.

Continuing on with the Greek winds, today is about the Aurae.

In Greek mythology the forces of nature were usually

overseen or personified by some god or goddess, some monster or the other, or by a different sort of being — the nymph. Technically, nymphs were not gods, nor were they immortal like the gods. They did eventually die, but in their death, most often what you got was a transformation. Nymphs were the personified aspects of earth, their essence and being tied to the water, air, trees etc, in which they lived. The myths are filled with nymphs giving up their lives to transform into trees and plants, water and stone. The first time I read this I thought of Newton’s First Law of Thermodynamics — energy only changes form, it never disappears.

Aurae are the nymphs of the cooling breezes. In artworks of the time, we see Aurae with billowing garments that hold those breezes. And when you read about them, they are always seen in the plural. That’s a good thing to know because the myths are confusing enough sometimes. It would be easy to confuse them with Aura the Titan goddess of the Breeze and Fresh Air of Early Morning. 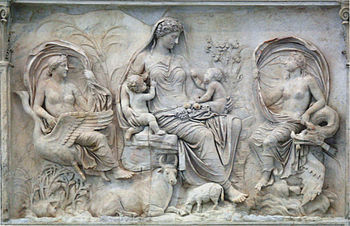 I’ve come across several origins for these ladies. Some say they were the daughters of Boreas and the wind brothers mentioned in previous posts. Most say they were daughters of Okeanos, the earth-encircling fresh-water stream. Others say the Aurae just were — sprung from the earth mother as is to become protectors who tended the various natural phenomena such as springs, lakes and rivers, clouds, trees and meadows, caves and beaches, etc. Although they weren’t goddesses, they had good standing with the gods and were always invited to attended the various assemblies on Mount Olympus.

In Homer’s Odyssey, Okeanos sends his daughters and their accompanying breeze to gently blow over a beautiful meadow on earth called the Elysian field. It’s there that Zeus slips away from Mount Olympus and enjoys perfect happiness for a while. He is a tormented husband after all. Later, the poet Virgil will write this field as located in Hades realm — a exquisitely beautiful place the worthy go after they die.  The Aurae continue to blow their refreshing breezes there too.

Sometimes these breezes have fits of temper and blow strong enough to carry ships off the water. Ah those temperamental winds.

For 100 days, I’ll post something from my chosen topic: Clichés.
There are 80 entries to come.

The June contest is winding down on the Romance Books ‘4’ Us. This month’s contest will have 2 winners who’ll each receive a $50 gift card for Amazon/B&N and a $10 gift card toward books from Secret Cravings Publishing. The rest of the prizes will be split between winners (randomly chosen by RB4U). http://www.romancebooks4us.com

4 Responses to Shoot the breeze