The goddess of cold mountain winds

We’re having a stormy week in my corner of the Midwest and it’s given me an idea for a short series. As mentioned yesterday, humans have been at the mercy of weather since the very beginning. Imagine hearing thunder roar overhead. How could you not picture something huge and powerful stomping through the heavens?

Fear of the unknown being what it is, I’m sure it didn’t take long for all manner of  weather deities to appear on the scene. If you knew who your gods were, you could make offerings and pray they’d go easy on you where extreme weather was concerned.

As long as my bad weather lasts, or longer if this topic is interesting enough, I’ll discuss the ancient gods and goddesses who were said to influence the weather. I started my series yesterday with the Theoi Meteoroi of Ancient Greece — the weather gods.
Here’s another~ 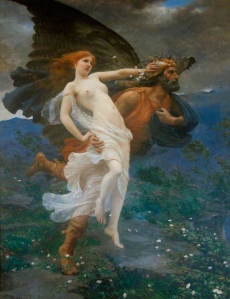 The flight of Boreas with Oreithyia William Mitchell – 1893

Oreithyia
Apparently Oreithyia was a common name to the ancients as several figures go by it.

The Oreithyia who influenced the weather was a mortal woman, a princess born to King Erechtheus of Athens.  As the story goes, she caught the eye of Boreas the North Wind and the blustery god attempted to woo her. Here’s where the story splits…some versions have him stealing her away and forcing himself on her. Another version has him stealing her away and she falls to her death.  Nothing to do at that point but give her immortality.

However it was, she eventually gave Boreas four children: two daughters Chione and Cleopatra (not the famous one), and two sons with wings like their father named Calais and Zetes (the Boreads). Both sons joined the Argonauts on the quest for the golden fleece.

For 100 days, I’ll post something from my chosen topic: Clichés.
There are 89 entries to come.

Don’t rain on my parade.

The June contest is on Romance Books ‘4’ Us and the theme is wedding. This month’s contest will have 2 winners who’ll each receive a $50 gift card for Amazon/B&N and a $10 gift card toward books from Secret Cravings Publishing. The rest of the prizes will be split between winners (randomly chosen by RB4U). http://www.romancebooks4us.com

4 Responses to The goddess of cold mountain winds