Always look on the bright side

My internet is rather sketchy this morning. I was expecting it. This past Tuesday our sun unleashed two solar flares — a large blast and a lesser one right after. According to NASA “Solar flares are powerful bursts of radiation that send gases, plasma and other matter into the solar system. Harmful radiation from a flare cannot pass through Earth’s atmosphere to affect humans, but when intense enough, the explosions can disturb GPS and communications signals.”

Apparently such flares are classified by size like tornadoes. This was an X-class solar flare — an X2.2 to be exact. One of the largest. At this size there’s a chance the event might “trigger planet-wide radio blackouts.” From my understanding of it, these things let loose a coronal mass ejection that takes from one to four days to pass over the earth. It’s Thursday, so there you go — the force behind my sketchy internet reception.

Solar flares. One can’t help but marvel at the earth’s fragile balance on the cosmic knife edge.

UPDATE:  Click here for the most recent news on the solar storm.

Perhaps we’ll see the Aurora Borealis this week. They tend to happen on the heels of solar flares. Every once in a while, the northern lights dip south and dazzle the eye in my neck of the woods. Mainly we see them as faint blue-green ribbons that wave and ripple interspersed with spotlight-like beams shooting up from the horizon. I’ve seen auroral displays in the Canadian wilderness — bold sweeping curtains of greens, blues, 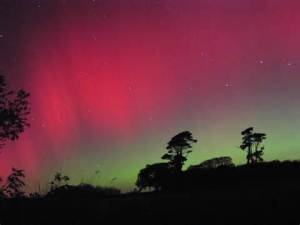 and swaths of magenta-hued reds. I imagine they’re even more spectacular further north.

The deep magenta doesn’t usually come this far south. Usually. Just once did I witness an aurora-magenta night sky similar to the one shown here. The sky I saw was darker at the horizon and redder like burning coals. At the time it honestly didn’t register that what I was seeing was an auroral display. It occurred in October. My husband was away at a conference and the US had just gone to war in Afghanistan. I was following the tensions in the world at the time and not celestial events so I wasn’t expecting this bold visual lighting the sky. The first ten minutes of sky watching had me wondering what terrible thing was happening on the ground that allowed me to see it burning in the sky. Forest fires do that. New York’s Twin Towers had just been attacked so my mind envisioned all sorts of terrible things. A few phone calls revealed what it was.  I watched it throughout the night and hauled myself to bed at 2AM. At one point it looked like someone had taken a photo of the night sky, outlined the farm buildings with white chalk, then smeared that outline up into the magenta sky. Everything glowed. It was amazing. And the batteries were dead in my camera.  😦

Speaking of power…I discovered something truly fantastic the other day. It was new news to me though several friends had already heard about this invention and the crowd funding  getting it started. I’m talking about the Solar Roadway. I can picture this coming to parking lots and driveways soon. I doubt it’ll pave every road and lot in my lifetime but oh how my imagination runs with it. I’m sure this manufacturing has its own impact, electronics come with their own brand of poison and pollution, but can you imagine the new jobs this refitting would create around the globe? Not to mention cleaner world in the long run. Clean solar energy is the way to go. I’ll stop here with the video. I’m feeling the bubble of my political discontent rising.

For 100 days, I’ll post something from my chosen topic: Clichés.
There are 96 entries to come.

Always look on the bright side

The June contest is on Romance Books ‘4’ Us and the theme is wedding. This month’s contest will have 2 winners who’ll each receive a $50 gift card for Amazon/B&N and a $10 gift card toward books from Secret Cravings Publishing. The rest of the prizes will be split between winners (randomly chosen by RB4U). http://www.romancebooks4us.com

5 Responses to Always look on the bright side