The A to Z Challenge – W for White City

I’ve mentioned more than once how I grew up with Chicago’s museums. The city is filled with museums and cultural institutions of all sorts. The Museum of Science and Industry, the Field Museum of Natural History, the Shedd Aquarium, the Oriental Museum, the Adler Planetarium, the Museum of Surgical Science, the Academy of Science (no longer there), the Lincoln Park and Garfield Park Conservatories, the Chicago Historical Society, two renown zoos, and the Art Institute are just the ones I visited regularly. There are more than 70 museums and cultural institutions and at least 15 museums for art alone. There’s a link to a broader list at the bottom of this post should you ever wish to visit.

There’s a reason Chicago sports all of these science, historical, and cultural resources. Victorian industrialists made the city a showcase of intellect and cultural pursuits. Why? Money of course.

In 1890’s America a great shift in the tide had brought change to the national identity. We’d gone from a mostly agrarian society of family farms and specialty skills, to urban living tied to manufacturing. Class tensions rose. The industrial, mechanical, and electrical revolutions of the gilded age were transforming America. The railways tied the nation from sea to sea, and the transatlantic cable connected the USA to Europe. Though the after effects of the Civil War were still felt, growth and expansion had taken on new proportions. The great shift took us from a producer society to a consumer society and the industrialists and their corporations sunk their roots deep. Social ownership of our people’s government i.e. by the people for the people was a thing of the past. Big business entered politics with their lobbyists and never left.

Chicago had pretty much burned to the ground in the Great Chicago Fire of 1871. Like many waterfront cities at the time, it was an ugly shamble of structures from fine brick to shanty. Businesses begged investors to come and it was decided that when Chicago rebuilt, it would be a much grander place that reflected an idyllic life. Then as now, the look of prosperity is often as good as the reality in getting people to invest. More investors meant greater expansion, and greater expansion meant greater profits for the city business men and bankers.

After the successful fairs held in Britain and France showed the world the marvels of a new age, there was a grand desire to show the world such greatness and innovation existed in America too. For example: Chicago had the world’s first skyscraper. Though the fair was billed a celebration of Columbus’ discovery 400 years prior, in Chicago it began as the desire of a few men to bring dollars into their city. Chicago’s leading capitalists and exposition sponsors, Philip Armour, Cyrus McCormick, Marshall Field, Gustavus Swift, and Charles Yerkes, were not only interested in generating commercial profits and increasing real estate values, they were also  motivated by the prospect of securing greater prestige for themselves and for their city. But they weren’t alone. Civic leaders in St. Louis, New York City, and Washington DC, all wanted to host an exposition. Chicago’s railroad tycoons, bankers, and various business leaders made a plan, and oh what a plan it was.

So much lobbying was going on that Chicago was nicknamed the Windy City because of all the talk. Chicago’s promoters raised over $5 million in stock subscriptions from people from every walk of life to show financial support from the city and state. Impressive on its own, but what led Congress to vote in Chicago’s favor was the ability of a single banker, Lyman Gage, to raise several million more dollars in a 24-hour period thus besting New York’s final offer.

Over 40,000 skilled laborers and workers 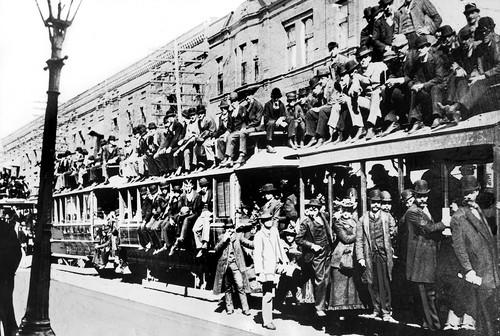 were employed in 1891 and the rush was on. Famous architects of the time, Daniel Burnam and Frederick Law Olmsted drew their grand plans. There would be parkways and waterways and buildings done in the neoclassical style. One of the more inspired ideas during this building process was to charge people 25⊄ to watch! And they did come to see the White City rise. It’s estimated more than 3000 people a week paid their quarters to see it happen.

All smoke and mirrors

It’s hard to believe but the Exposition with all it’s buildings was basically all hollow framing and plaster — all impermanent structures with the life equivalent of a mayfly. That’s where the White City name originates. All gleaming white plaster. In the end 633 acres of land, 18,000 tons of iron and steel, 75 million board feet of lumber, 120,000 incandescent light bulbs, 30,000 tons of staff a.k.a. stucco,were used to create 14 main buildings with floor space totaling 63 million square feet to house 64,000 exhibits. Needless to say, that all took some time to accomplish. They were forced to delay their opening from late 1892 to May, 1893. And all the while the hype continued. People grew even hungrier for it. You’ll see why in these few pictures. What a grand venture. To me it’s made all the more remarkable because it’s all a facade. 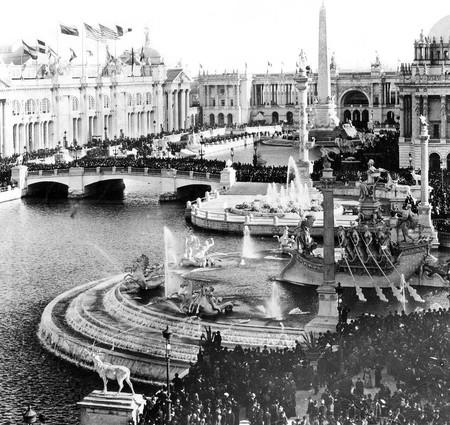 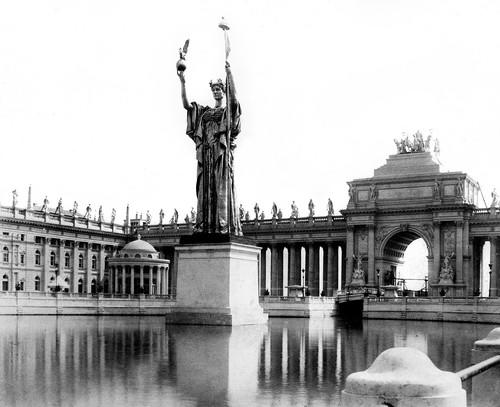 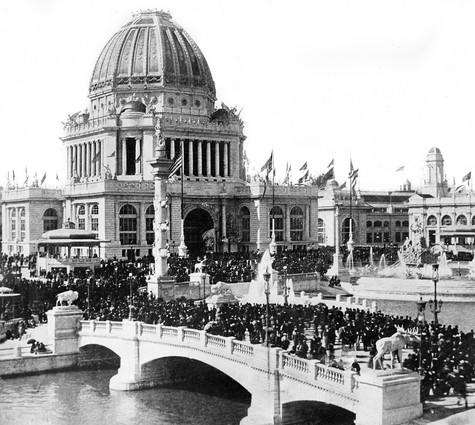 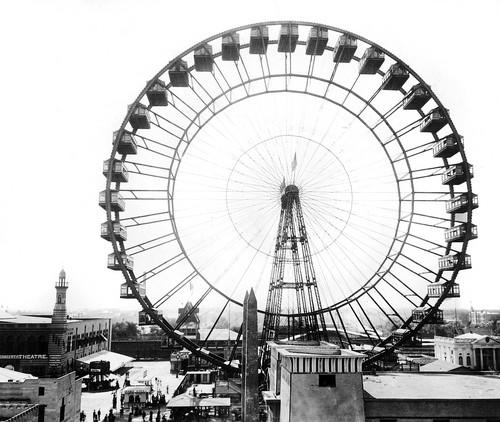 The Columbian Exposition debuted several consumer products we’re familiar with today, including Aunt Jemima syrup, Cream of Wheat, Shredded Wheat, Pabst Beer, and Juicy Fruit gum. It also introduced picture postcards, carbonated soda, and hamburgers to America. It allowed the business elite to rise to a national power that still holds fast today. Above all, it introduced electricity to the world.

The Exposition ran for 179 days. Attendance at the fair totaled 27,529,400 — more than 150,000 people a day. Wow. I can’t help thinking of sanitation. The wood and plaster used in the construction of the buildings were fire hazards. Within a year of the expo closing, most of the White City’s buildings were destroyed by fire. The Chicago Museum of Science and Industry is a remnant. As the Exposition’s Palace of Fine Arts, it was made a permanent feature of the city as a museum in 1933 when plaster was replaced with limestone. The building that had housed delegates of the world’s congresses would become the Art Institute of Chicago. I’m a Chicago native so I have a lot of details in my head. But were I to go into more here, the post would last a week. I’ll offer some fantastic links instead. Ask questions if you like.
🙂

A terrific link with facts and figures

So many interesting places in Chicago

The Chicago Historical Society has lesson plans
And just a bit more… Although grand on a different scale, the city would do it all again in 1933 for the Century of Progress exposition.