The A to Z Challenge – M for Medicine Shows & Mountebanks 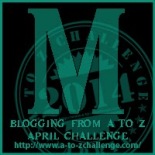 I got into a conversation with my husband and daughter the other day. They both watched a recent release of the series Mad Men. I’ve never watched the show, but it’s my understanding it’s about the world of advertising in the middle of the last century. Apparently psychology played a large role in getting people to buy products after the war.  We talked about advertising on the scale it is today. I think advertising always contained hype and a bit of fact-bending.  As per the habit of the writer’s mind, I wandered with the topic and ended up on a friend of mine.  He historically portrays a composite character from an old-time traveling medicine show who “sells” tonics to a a gullible crowd. And so I discarded the topic I’d chosen for M and started anew.

To examine American Traveling Medicine Shows one needs to begin with the mountebanks of Europe. In case you don’t know, a mountebank is a purveyor of quack medicines. In other words a charlatan or a fraud. Mountebanks came into their own in the Middle Ages where they peddled tokens to protect one from the recurring runs of plagues and devils — the usual stuff. During the Renaissance the mountebanks dazzled their crowds with street theater that often include feats of magic, amazing skills and illusions, music, or staged miracles. The idea was to draw them in, then sell to them!

By the 1700’s, the mountebanks were pitching their spiel and selling worthless products to a budding nation. The quackery got so bad in North America that the colonies tried to put an end to them early on. Several colonies successfully passed Acts through their local governing bodies regulating these home made medicines, while other colonies passed Acts for outright suppression of mountebanks.

But in much the same way today’s

advertisements influence with subliminal sexual gratification, the promises the mountebanks made on behalf of their products were siren’s calls to the gullible or afflicted, and consumers flocked like sheep to buy them.

There was more at play than promises.

I’ll begin with the shills — those who came into town ahead of the mountebanks and pretended they were in some sorry condition. To gull the crowd, they’d buy the magical elixirs, drink them down on the spot, toss down their crutches and be miraculously “cured”. You can bet a special bottle was set aside just for them. The traveling medicine shows curried legitimacy with costumed characters pretending to belong to the mysterious cultures of the Orient.  The Hindu snake handlers, 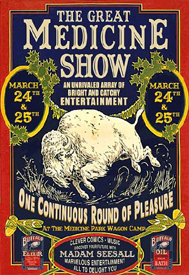 Home remedies at the time often followed the ancient belief in the doctrine of signatures . That is, if a leaf is shaped like a liver then it must treat the liver. Snakes, for example, slithered effortlessly on their healthy spine, therefore snake oil must be good for rheumatism. Often real medicines and tinctures tasted bitter so medicine show tonics had bitter ingredients added to lend a bit of authenticity. Cocaine and opium were common additives, as were turpentine, creosote, stump water, and bitters. Mostly, they contained alcohol. In some states were Blue Laws were on the books, you couldn’t buy spirits on the weekends, but you could buy that tonic that kicked like a mule.

Inventing problems the tonics and elixirs are alleged to solve.

In their mesmerizing sales pitches, some pretty 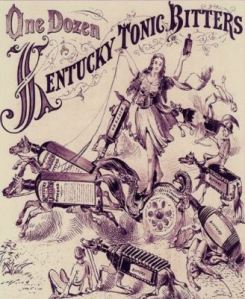 outrageous promises were made. Eliminating baldness and being irresistible to the fairer sex were the benign claims. Curing tuberculosis, diphtheria, venereal diseases, infant colic and digestive problems, female complaints of all sorts, and even as a cure for cancer, were all found in this one bottle and it only cost you a few pennies… and a little blind faith. Bottles were purchased and business was good. Before you knew it the medicine show had gone. Speed was important lest someone become ill or drunk, as they often did. Children, the elderly, and the infirm were dosed. Often with tragic consequences.

On the flip side, some common old-timey patent medicines actually became household products with a genuine following for their efficacy. I remember some oldies were still on the drug store shelves when I was a kid. We know them today as Fletcher’s Castoria, Ex-Lax, Absorbine Jr., Doan’s Pills, Geritol, Bromo-Seltzer, Carter’s Little Pills, Vick’s VapoRub, Smith Brothers Throat Drops, Philips’ Milk of Magnesia, and who doesn’t know Bayer Aspirin and Anacin?

After centuries of charlatanism, the Pure Food and Drug Act was enacted in 1906 requiring manufacturers to list their ingredients on labels and restrict misleading advertising claims. In 1938, safety testing came into being. In 1962, effectiveness testing was required. And so, the snake oil and the snake oil salesman left the scene. But if you look closely, you’ll see they’re still out there making up the ads and commercials that bombard our lives each day.

Here’s a good friend of mine playing his alter ego — a colonial mountebank.
Fun to Note: Towards the end he makes music with two sets of bones. He taught me to play. I’m nowhere near that good. 🙂

Here’s a later example of the medicine show quack. He does a very good job as a slick talker. Imagine him with his cart in 1870’s rural Iowa or Oklahoma and the purses emptying to buy his elixirs.

More From the Oklahoma Historical Society

Fast Fact: In their book Freakonomics, authors Steven Levitt and Stephen Dubner point their finger at Listerine as the source of today’s shame-based selling. I say shame-based because we once lived in a haze of child-like innocence unaware of the abject offensiveness of split-ends, graying hair, sweaty underarms, stained teeth, dandruff, ring around the collar, bad breath and more. Fortunately, the makers of Listerine clued us in at the turn of the last century. And it grew more outrageous as time went on. Even Lysol was sold as a douche. Seriously.

Last Week for wild foods recipes on my satellite blog!
http://calliopeswritingtablet.blogspot.com/
The Authors in Bloom event highlights those things authors do outside the fiction. We garden, we cook, we craft etc. One of the more unusual things my husband and I have done was lead wild foods programs for Chicago’s Field Museum. For this event I’ll be sharing my recipes. Do stop by. You may have delicious ingredients waiting in your backyard!