“He, who every morning plans the transactions of the day, and follows that plan, carries a thread that will guide him through a labyrinth of a most busy life.”
~Victor Hugo

You can’t plan unless you know what you’re working with.
~Rose Anderson

To the ancients, the Muses were considered the source of knowledge and higher learning. When I took my first steps as an author, I created Calliope’s Writing Tablet. My blog is dedicated to Calliope the writer’s Muse because she was all about learning and I am too. Just about everything regarding my journey has been put on my blog, lots about me too…including my laurels and skinned knees. In the remaining days of 2013, I’ll be wrapping up my thoughts on the year. The first of several musings: My test regarding blog hops.

I had a larger explanation planned for this week but the computer woes have made it smaller.  I was supposed to get my computer on the 18th. Didn’t happen. That eliminated more than a few gifts I’ve been assembling since August. Imagine opening an IOU Christmas morning. Good sports, my family. Tracking the laptop revealed it would come the 21st. No, there was a holdup somewhere in transit. Then it was supposed to arrive at 6pm on Christmas eve. Nope, didn’t come. On the 26th it was moving again. I’ve just tracked the package and it’s somewhere in Chicago. It might get here today. I won’t hold my breath. How I’ve managed to keep this machine running is a mystery. My keyboard has about a 1/4 of the keys not registering when I tap them. Now that’s an annoyance. Every Like is Lie. Every ‘ is a “. Every People is eole. Grrrr…what a time waster.

Anyway…
I’ve been doing blog hops for three years now. Such online events make sense to me. I have my followers as do the other participants. If we all promote the hop to our fans and followers, then that’s a lot of exposure to readers we wouldn’t have otherwise. Last November I decided to do a test. Over the course of the year, I joined every hop I could find with a plan to tally the outcome a full year later. With diligent hunting, I managed to hook up with one a month, and occasionally two or three. Hops large and small are the reason I have so many satellite blogs. My prizes were my ebooks and I’ve kept track of them as business expenses. Initially, I pictured a chart with highs and lows. Unfortunately, I found myself just too busy to make a chart.

Early on, I made up my mind not to mention which hops were the best and which turned out to be duds because one man’s ceiling is another man’s floor — or– a few may not have worked for me, but they could have been great for other participants. They take effort to put together regardless, so I’m grateful the hop owners tried.

When you’re doing one to three hops a month like I was, you pretty much get the hang of it. As they’re all basically the same, unless they have a theme, setting them up takes just minutes to do. Out of all of them, there were two that completely blew my mind because they were odd and very different from the others. Both organizers running them wanted me to post their page on my blog — a full page about them. How the heck would that benefit me? What’s more, every participant was supposed to post the same page. Why would any reader follow to the next blog if each page is the same?

I did one of them because just maybe there was something to learn here. I wanted to see if the odd setup would even work. My stats show no. The moment I discovered the second hop worked the same as the first, I bowed out. I hope it had the desired outcome for the organizers and the participants who stayed in. They just didn’t work for me. One suggestion I’d make if this is a plan they’ll stick with for future hops is tell the participants at sign up that it’s a different scenario rather than send the details later. Had I known, I wouldn’t have signed up for either.

So what I learned was this — not all hops are created equal. The following are results as seen through my personal lens. Another author might have had a different outcome. Here’s the rundown without a chart:

In conclusion, I recommend the effort. Especially if you’re at a loss as what to do with your blog and need to post something. In this web-driven world we live in, something is better than nothing.

Sample my love stories for free! 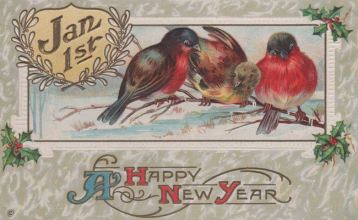 If you’re here for the first time, my husband and I are assembling a vintage holiday postcard scrapbook one card at a time. I’ve been posting one or two post cards each day and plan to keep it up from now until January.

New Years cards from here on out.

Several promotional opportunities for romance authors can be found on my Exquisite Quills group blog.
http://exquisitequills.blogspot.com/

First Kiss Wednesday ~ share your best 300 word kiss.
Set the Scene in Six ~ share your backdrop or lead-up on Sundays.
The Genesis of the Story ~ share the spark that ignited your novel
Author Interviews ~ We’re booking 2014 now.

Coming January 2014
A place for your old stars to shine