I occasionally insert humor into my stories so I’ve been talking about Satire this week. Many mammals exhibit a sense of humor, and don’t you wonder why?  I see it all the time with my dogs. They tease one another to encourage play. Studies show many animals laugh…or laugh in their own way, I suppose…through little sounds of satisfaction. Apparently you can really tell the difference in the primates. They hoot and grin. So do we.
So what exactly is humor for? Some researchers believe it’s part of the social bonding processes we humans have. Camaraderie gets built, efficient hunting follows, the species eats and survives. This makes sense.

As mentioned over the past two days, satire is an ancient practice considered by many as the most trenchant or keenest way to observe society. Humans find satire funny because we share the human condition. I don’t need to step on a rake or sit on a tack myself, but I might suppress a chuckle when The Three Stooges do it.  Laughter is contagious too! See for yourself.

LOL So now that we’re both laughing and we don’t know why…
There are three main forms of irony found in Satire. Today is about Dramatic Irony – A form of satire understood by the audience but not grasped by the characters in the play. In the old I Love Lucy clip I’ve chosen, we know what this miracle elixir is going to taste like before Lucy does. 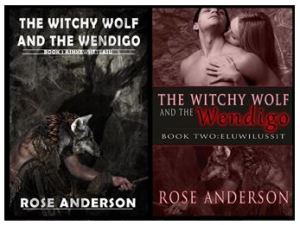 As an example of the humor I use in my writing, I offer a snippet from book1 in my saga The Witchy Wolf and the Wendigo — a paranormal tale about an ancient Native American shaman trying to fit into the modern world.
Ash has a very interesting talent — the ability to shape-shift. Here, he feels altered, and assumes this sensation is caused by a magical drink — beer.
………………………………..
Ash felt odd. The sensation was not unlike the altered mental state brought about by the ordeals of his training, when his mind ventured in another world while his body stayed in this one. His earlier jumble of thoughts returned. It is the beer. The beer is bringing this sensation. It was only a guess but the odd feeling was intensifying since the last two glasses. Watching Livie drive away, he slid his hand down the front of his jeans to grip himself. Kissing her had made him hard and now he ached.

Knowing he had to resume his wolf form at Livie’s home, he took a deep breath and shifted, but his inebriated mind was not concentrating and he ended up with a raven’s head atop his man’s body. He tried again. Forgetting that he still wore clothes, he found himself a small bird, pinned and struggling under the heavy garments that had fallen to the ground in a heap. He shifted into a feathered snake before taking the form of a mouse and working his way out of a sleeve.

Watch the trailer for the details. You’ll find it in the Links tab at the top of the page

I’m participating in the Trifecta this week.
http://calliopesotherwritingtablet.blogspot.com/

For 100 days, I’m posting a little something from my chosen topic of Words & Quotes of Love. There are 47 entries to come. Here’s one for today:

“At the touch of love, everyone becomes a poet.”

>>Subscribe to this blog for all the “what’s up with Rose” news!<<

Rose Anderson is an award-winning author and dilettante who loves great conversation and delights in discovering interesting things to weave into stories. Rose also writes under the pen name Madeline Archer.
View all posts by ~RoseAnderson →
This entry was posted in Past Posts - you'll never know what you'll find and tagged Satire, situaltional irony. Bookmark the permalink.