BTS e-magazine and Decadent Publishing are hosting a rather large blog hop from now until the end of the month. I’m one of 112 authors joining in, and we all have prizes! For the Grand Prize: One winner will receive their choice of a Kindle Fire 7″ HD or NOOK HD. This option is for US contestants only. International winners will receive Paypal Cash to spend how they wish. Scroll down to see my prize.
Click Here for Participants

Here’s a bit more from The Witchy Wolf and the Wendigo ~ Scroll back a day to see the trailer. Take a peek at the first book in the series with the Look Inside feature on Amazon.com: http://www.amazon.com/dp/B00AFFFESI

This scene tickled me when I wrote it. I hope it does the same for you.

Setting the Stage:Ash, the ancient Native American shape-shifting shaman is slowly integrating himself into the modern world. At dinner with new friends, Ash drinks beer for the first time and later determines this is not a drink to underestimate, even in small quantity. He’s been staying at Livie’s house as a dog, and he needs to get back there before she does. He suspects the beer is interfering with his ability to concentrate. The following is the best slapstick by an ancient shaman.

Knowing he had to resume his wolf form at Livie’s home, he took a deep breath and shifted, but his inebriated mind was not concentrating and he ended up with a raven’s head atop his man’s body. He tried again. Forgetting that he still wore clothes, he found himself a small bird, pinned and struggling under the heavy garments that had fallen to the ground in a heap. He shifted into a feathered snake before taking the form of a mouse and working his way out of a sleeve.

Read the origins of this tale on USA Today 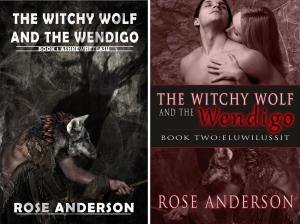 For 100 days, I’m posting a little something from my chosen topic of Words & Quotes of Love. There are 80 entries to come! Here’s one for today:

“Until I loved, I never lived – enough.”

On my satellite blog, I’m participating in the Book Indulgence Hop! We have prizes!
http://calliopesotherwritingtablet.blogspot.com/

Over on my other satellite blog. I’m hosting Jane Leopold Quinn for the Fall Into Romance Hop. Come see! http://calliopeswritingtablet.blogspot.com/

Here’s my prize:
One lucky winner chosen randomly will receive
a Love Waits in Unexpected Places coffee cup,
a collection of Victorian reproduction trinkets,
and chocolate!

Coming this week on my satellite blogs:

>>Subscribe to this blog for all the what’s up with Rose news!<<