Posted on September 2, 2013 by ~RoseAnderson

and rural culture in Europe and America became industrialized and urban. Before then, most manufacturing was done in the home using basic hand tools and machines such as spinning wheels and looms. With the development of the steam engine, special-purpose machinery was invented and factories and mills went into mass production. There is no doubt industrialization brought volume and variety of manufactured goods into our lives and with them an improved standard of living for many. But then as now in other parts of the world, poor and working-class people toiling behind the scenes faced grim working and living conditions. 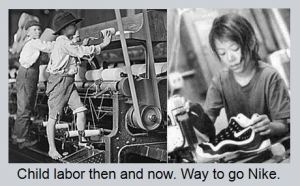 At the height of the American Industrial Revolution in the late 1800’s, children as young as 5 toiled alongside adults in factories, mills, and mines across the country. Twelve-hour days and seven-day weeks were the norm. These jobs were mostly filled by the very poor and often their working conditions weren’t safe. Pay was often ridiculously low and children made fractions of pennies compared to their adult coworkers. Worse, basic needs such as access to fresh air, sanitary facilities and breaks rarely came with this employment, but who could complain? Complaints could lose you your much needed job.

Labor unions first made a showing in the late 1700’s. As manufacturing increasingly replaced agriculture and industrialization grew, these unions began organizing strikes and rallies to protest their poor working conditions to compel employers to negotiate reasonable hours and better wages. But there was a problem with the poor protesting for better hours and pay. The poor were disposable and plentiful. If one hundred poor were fired for stirring up trouble, two hundred waited for their jobs. Needless to say, very little improved. The poor continued to work long hours in dangerous conditions and the industrialists grew richer.

Across the United States, people who manufactured created their unions in an attempt to join voices to lobby for better conditions and wages. There were unions such as the Knights of Labor, the Brotherhood of Carpenters and Joiners, the Amalgamated Association of Iron and Steel Workers, the American Flint Glass Workers’ Union, the International Molders and Foundry Workers Union, even the Cigar Makers’ International Union. Despite the fact they had nothing to do with one another, these few and many more combined forces and became the Federation of Organized Trades and Labor Unions of the United States and Canada. This organization would later become the American Federation of Labor or AFL. Years later it would merge with the Congress of Industrial Organization or CIO. We know it today as the AFL-CIO – the longest lasting and most influential labor federation in the United States.

So let me back up a bit…May 1, 1886 was declared the date to strike and rally throughout the United States. As the date approached, U.S. labor unions planned a general strike in support of the eight-hour day. Estimates place of the number of striking workers shouting “eight-hour day with no cut in pay!” across the country from 300,000 to half a million. Many of these events turned violent, including the infamous Chicago Haymarket Riot that occurred four days later. Policemen died, insurgents were hanged. Here’s a picture of the Haymarket Martyrs Statue. 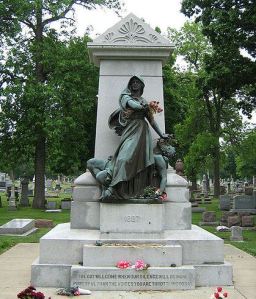 My hometown of Chicago played another role. On May 11, 1894, employees of the Pullman Palace Car Company in Chicago went on strike and because Chicago was the hub of rail lines across the country, this crippled railroad traffic nationwide. When you stop to think about the freight being transported along those lines, the impact was staggering. The federal government dispatched troops to Chicago to break the strike and once again riots broke out. It proved one thing however, while Cigar Makers’ International may not have much power to negotiate alone, there was strength in numbers. This is why you might see auto workers striking with schoolteachers. Seeing the handwriting on the wall, Congress passed an act making Labor Day a legal holiday.

In my own family history, I had a great uncle Joe, my grandmother’s older brother, who worked in the Indiana coal mines. My great grandfather had passed away and the family desperately needed the income of the older boys. The coal mine was the only game in town. As a young man, a loaded coal car rolled over the top of Uncle Joe’s foot. Knowing such a crippling injury would get him fired, he laced his boot tighter and finished the day. At home that night, my grandmother remembered him sitting at the table in the light of the oil lamps. He removed his boot to see how badly he’d been injured, and all but one toe came off with the sock.  He went back to work the next day, and walked with a limp the rest of his life.

I hope you all enjoy your “workingmen’s holiday” today. And while you’re at it, you can thank the Amalgamated Clothing Workers of America for your weekend. These days we have today and take for granted were earned.

New To Do: 100 Things Blogging Challenge

I’ll post a little something from my chosen topic of Words & Quotes of Love. There are 98 more entries to come! Here’s one for today:

Join us today at
Romance Books ‘4’ Us

Rose Anderson is an award-winning author and dilettante who loves great conversation and delights in discovering interesting things to weave into stories. Rose also writes under the pen name Madeline Archer.
View all posts by ~RoseAnderson →
This entry was posted in Past Posts - you'll never know what you'll find and tagged labor day. Bookmark the permalink.