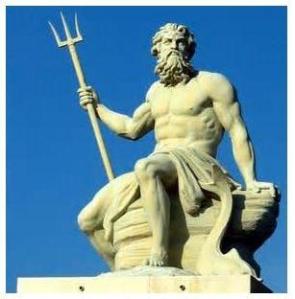 Poseidon, god of the sea and brother to Zeus and Hades, drew lots with his brothers for the realms. Zeus got the heavens, Hades the underworld, and Poseidon gained the waters of the world. Funny thing about that family…

The three brothers’ grandfather Uranus (father of the sky) fathered the Titans with Gaea (earth mother). These first gods were Oceanus, Tethys, Hyperion, Theia, Coeus, Phoebe, Cronus, Rhea, Mnemosyne, Themis, the Hecatonchires, Iapetus and Crius. (this bunch produced everyone else). Uranus and Gaea also had the Cyclops.

The Cyclops were gentle beings and Gaea loved them. Uranus however, found them hideous so locked them away. Broken-hearted Gaea asked Cronus, her most devious son, to overthrow his father. This act would come back to him. What goes around, comes around.

Cronus (who married his sister Rhea) was well aware of father/son relationships, so he swallowed each of Rhea’s newborn babies. Having enough of that, Rhea gave him a swaddled stone to swallow instead. The son that grew outside of Cronus’ belly was Zeus. Following the family tradition, Zeus slayed his father and freed his fully-grown siblings from Pop’s stomach.

So where am I going with this? The storms yesterday were unbelievable. From my perch on this hill, I watched a lightning show that could only be Zeus chucking thunderbolts at the earth. In my area, 4-6 inches of rain fell, rivers spilled their banks, and roads and houses were flooded. Poseidon often flooded the land when he had one of his fits. This is all around me —

Fortunately, Hades stayed out of the fray.

I absolutely love mythology — all sorts, all cultures. I cut my teeth on a very old copy of Bulfinch’s Mythology when I was twelve. Get your 1858 copy free at Project Gutenberg http://www.gutenberg.org/ Lots of great free reads there.

Interested in mythology too? Start with the water deities. http://en.wikipedia.org/wiki/Water_god

Join us today at Romance Books ‘4’ Us