Ever wonder who said it first? Think about A stitch in time saves nine. Who thought that up? I’ve always assumed it was Benjamin Franklin, but it was old by the time it made its way into Thomas Fuller’s Book of Proverbs (1732). A stitch in time is a cautionary proverb that makes sense — fix a repair when it’s easy and requiring little effort (one stitch) rather than wait and make larger repairs after it’s worse (nine stitches). Thinking about it now, I’ll bet dollars to doughnuts it’s has nautical origins. (lol who made that one up?)

Word nerd that I am, I’ve wondered about stuff like this since childhood. Ok, so someone says too many cooks spoil the broth. So let’s say there’s a kitchen full of people standing around to hear it. They must remember the phrase and repeat it often for it to root itself into language. They all must tell two friends, and the friends tell two friends..and so it goes. That’s huge. Honestly though, was it that memorable a phrase to allow it to linger through centuries?

Maybe it’s like the 100th monkey theory The-Theory-of-the-100th-Monkey    Perhaps many cooks around the world made the same observation at approximately the same time. Perhaps what we see in this proverb today  is a blending of all those observations. Could that be how proverbs catch on like they do? Similar wording for similar observations = common usage across cultures = a place in our society’s daily vernacular? Yes, I think too much. 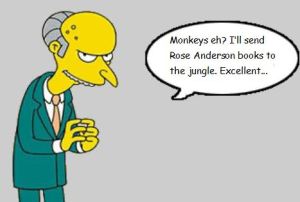 Please note: I do not own Mr. Burns. He just stopped by. Consider his presence a pitch for the intelligent poke at society known far and wide as The Simpsons.

If you’re here for the first time, my recent posts on this blog, excluding the Sneak Peek on Sunday, have been all about colloquialisms and proverbs. Scroll back to previous posts to find Americanisms, as well as Nautical, Biblical, and Shakespearean additions to our everyday conversation. When woven together, they make up a tapestry of thoughts, insights, and cultural input. In other words, they’re one of the things that make us, us. Keep on the lookout for Rose Anderson tidbits. When you hear them, you’ll know where you heard them first!

This batch of T’s is the last of them and appears heavy on Shakespeare.

There’s more than one way to skin a cat * There’s no accounting for tastes * There’s no fool like an old fool * There’s no place like home * There’s no smoke without fire * There’s no such thing as a free lunch * There’s no such thing as bad publicity * There’s no time like the present * There’s none so blind as those who will not see * There’s none so deaf as those who will not hear * There’s one born every minute * There’s safety in numbers * They that sow the wind, shall reap the whirlwind * Third time lucky * Those who do not learn from history are doomed to repeat it * Those who live in glass houses shouldn’t throw stones * Those who sleep with dogs will rise with fleas * Time and tide wait for no man * Time flies * Time is a great healer * Time is money * Time will tell ’tis better to have loved and lost, than never to have loved at all * To err is human; to forgive divine * To every thing there is a season * To the victor go the spoils * To travel hopefully is a better thing than to arrive * Tomorrow is another day * Tomorrow never comes * Too many cooks spoil the broth * Truth is stranger than fiction * Truth will out * Two heads are better than one * Two is company, but three’s a crowd * Two wrongs don’t make a right.

Join us today at Romance Books ‘4’ Us

for an interview of Author  Jenna Rutland. Get inside an author’s head and see where those stories come from!   🙂
http://romancebooks4us.blogspot.com

I’m participating in The Romance Reviews month-long event. There are prizes to be had!
Find their link on my satellite blog http://calliopeswritingtablet.blogspot.com/

“Have your senses titillated with hot writing, tame to sensual to explicit, from authors near and far.” “Post 7 paragraphs or 7 sentences or 7 words. The choice is yours.”

I have 7 posted on my other satellite blog. http://calliopesotherwritingtablet.blogspot.com/
Multiple blogs are infinitely useful!  😉

Rose Anderson is an award-winning author and dilettante who loves great conversation and delights in discovering interesting things to weave into stories. Rose also writes under the pen name Madeline Archer.
View all posts by ~RoseAnderson →
This entry was posted in Past Posts - you'll never know what you'll find and tagged 100th monkey theory. Bookmark the permalink.