I’ve said before, I’m shy. I’m far more reserved outside the realm of the written word. The internet has been good for me that way. I can say what I want to say and do it without feeling like I’ll implode. I can be anonymous to a degree. Before I walked away to pursue an author’s career, when my professional life called for the occasional public appearance, it was all I could do to stretch beyond that shyness to see to things that needed doing. After, I often felt like I’d been dragged behind the bus for several miles. For three long years I was the Chairman — the person in charge.  Talk about emotionally draining.  It’s hard to put on a face, a public presence, when you’re shy.  As a consequence of that shyness, promoting myself and my books doesn’t come easy. I was here recently doing just that:
http://www.joyfullyreviewed.com/interviews/author-spotlight-rose-anderson-2

With the launch of Loving Leonardo – The Quest (or LLtQ for brevity’s sake), I have the usual promotion to do. I did quite a bit of that this past weekend. As I mentioned above, it’s exhausting!

I find myself with the usual after feelings.  It’s like anticipating each film adaptation in the Lord of the Rings trilogy. You wait, you watch, you wait for the next. Then you come to the end. You get a boost when the DVD’s come out and you watch them all like a fiend. Then they’re over. The Hobbit just doesn’t fill the void but you’re willing to see the rest even though you’re not that into it. The thing is, you’re not really anticipating. You’re in a different mind set.

Now what’s next for me? I’ve considered writing another Loving Leonardo while the Victorian language, history, and personalities are fresh in my mind. And I may do that for those very reasons. Always testing the trend, I began a story last year — another paranormal with potential because it’s based upon a family legend. I love facts I can shape and form into a story. Well, I got off to a great start then the idea for Loving Leonardo came to me like I was possessed, so I switched trains. Three books later….

So with this Isle of Skye tale I just can’t seem to get back into the groove. It’s a great concept story (if I do say so myself). I’ve written 35,000 words and stopped, wrote some more then stopped. I’ve written and stopped several times more. I want to finish it but I got off at the depot and I can’t seem to get back on that train. I have to ask myself why. Last night as I drifted off to sleep I asked some pointed questions about this story. Like all contemplations, one thought led to another.

Have I matured in my writing since I began this story and three books later and I’m just not that author  anymore? (That does happen. My writing is vastly different than when I began.) Or, is it because my business plan called for five erotic romances to learn on and this is my last? Is this some message from my subconscious that says I haven’t learned enough to tackle the magnum opus just yet?  Hmm…  This requires more thought. I have a few things to do first, then I’ll read what I have so far and try finishing the story again.  I can always test the trends and make larger changes. Or I can just delete and take it off the slate completely. Not every story is meant to be told. Even one that started off so well.

The comments on LLtQ have been great so far. I’ve had quite a number of emails congratulating me on the new book. I’m surprised the story has fans waiting for the sequel. I’ve had comments about the characters. People have their favorites. 🙂 That’s a wonderful feeling for an author. If you’d like more info on Loving Leonardo – The Quest, scroll down to yesterday’s post. 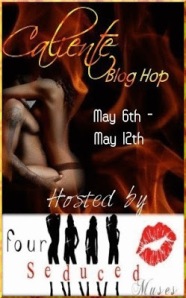 This week, I’m over at my Home Away From Home blog in the Caliente Blog Hop. Newcomers will see a muy caliente post a day for each of my books. I’ve done that here menos caliente. I couldn’t figure out the Adult Content controls in this blog so used that one instead. There are prizes to be had. 😀
http://calliopesotherwritingtablet.blogspot.com/ 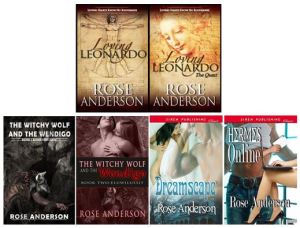 Rose Anderson is an award-winning author and dilettante who loves great conversation and delights in discovering interesting things to weave into stories. Rose also writes under the pen name Madeline Archer.
View all posts by ~RoseAnderson →
This entry was posted in Past Posts - you'll never know what you'll find and tagged Romance, Rose Anderson. Bookmark the permalink.