The A to Z Challenge – S for Sator Square

Today’s Calliope’s Writing Tablet post is brought to you by the letter S — Sator Square.

Mount Vesuvius erupted in 79AD and buried Herculaneum and Pompeii under tons of pyroclastic ash and debris. Excavations occurred centuries later and revealed the embellished splendor of that ancient world. A curious thing was found scrawled graffiti-style on a Pompeian wall – a Sator Square. This Latin palindrome is written in a square so the words may be read top-to-bottom, bottom-to-top, left-to-right, and right-to-left. 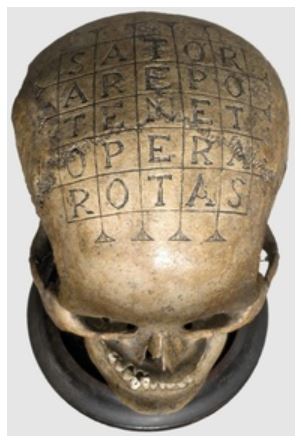 The Square was found in France, Portugal, Syria, and Egypt, and used throughout the Roman Empire stretching all the way to ancient Britain. Some examples were written on papyri and parchment and date from the fourth or fifth century. In this form it was carried as an amulet.

There has been a lot of speculation on this weird collection of words…everything from it being a secret Satanic or Templar code, to a secret sign of recognition exchanged between Christians during periods of persecution. Some have attributed magical properties to it because it’s a four-times palindrome and palindromes were viewed as being immune to tampering by the devil. Others believe the Sator Square’s origins is Mithraic (Ancient Mystery Religion)

Translated from Latin, here are the meanings of four of the words:
Sator = sower or planter
tenet = he holds
opera = works
rotas = wheels
The Arepo is a person’s name, perhaps added to complete the square. People who ponder such things take the meaning like so:
The sower Arepo holds and works the wheel. This might be interpreted as Arepo leads the plough. Perhaps that makes it a talisman of good luck for a bountiful harvest. 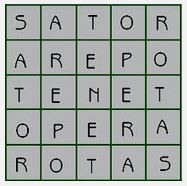 Is this just fun with words – a palindromic Sally sells seashells by the seashore? Is it a way to tap those devils or was it code to avoid persecution? We may never know. The writer in me thinks the Sator Square is far more than meets the eye.

Next, the letter S!

I’ve had so much fun discussing my historical posts in the A to Z Challenge. To keep conversations going, I’ve just launched a new blog — a Salon Blog called Another Stone Unturned Pressed for time now that my edits are in progress, I’ve put my Gobekli Tepe post there to reanimate the discussion. Let’s talk about it. What have you found on the web? What stone might still be unturned for interested learners? What can you share? I’d love to see! Read the details and let’s start the ball rolling. http://anotherstoneunturned.blogspot.com/

Come say say hi!
Subscribe to this blog for the latest happenings. 🙂

Rose Anderson is an award-winning author and dilettante who loves great conversation and delights in discovering interesting things to weave into stories. Rose also writes under the pen name Madeline Archer.
View all posts by ~RoseAnderson →
This entry was posted in Past Posts - you'll never know what you'll find and tagged Sator Square. Bookmark the permalink.