The A to Z Challenge – Q for Qi

“Everything in Life is Vibration”
– Albert Einstein 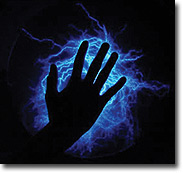 I had a marvelous physics teacher once who so captured my imagination, he set the ground work for my interest in Reiki  as well as for my magnum opus (scroll back to previous posts to learn more.) I remember him holding a glass of water and telling us there was very little difference in the two. Oh sure, one was mostly made of silica (SiO2) the other (H2O) was made of hydrogen and oxygen, but that’s chemistry and not what he was getting at.

In Physics, the big difference between the two was how the molecules moved. The molecules of the glass vibrated slowly, and because of that, the glass was hard. The water molecules were in high-speed motion and because of that, the water was fluid. If he had held a cup of steam, they’d be faster still. What was the force that moved water and glass at a molecular, atomic and sub-atomic level? We know it as molecular vibration. Living things also vibrate.

To those who study it, this vibration is referred to as life energy. Hippocrates, the well-known physician of Ancient Greece, called it the healing power of nature. The 16th-century alchemist Paracelsus called it Archaeus – the luminous, radiating healing energy that surrounds and permeates the body.

The concept of a life force has been around for thousands of years and spans the globe.
Here are a few examples:
The Lakota refer to this force as ni.
The Navajo call it nilch’i.
In Africa it’s known as Ashe.
Hawaiians call it Mana.
To the Egyptians, this was Sekem.
The Hindus refer to this life force as Prana.
The Ancient Greeks called it Pneuma or Thymos.

In China this is Chi, the life force strengthened by such focused activities as Tai Chi and Qigong. In Japan, it’s called Qi. Qi is life-force which animates the living forms of the world. What is it exactly? I suppose the best way to describe it is, it’s the vibratory phenomena that flows from, and surrounds all, living things.

To Luke Skywalker, this is the Force.

Here’s an interesting clip from Bill Moyers.
It’s clear he doesn’t know what to think of Qi.

Here’s an interesting albeit simple explanation of Reiki

I’ve had so much fun discussing my historical posts in the A to Z Challenge. To keep conversations going, I’ve  just launched a new blog — a Salon Blog called Another Stone Unturned  Pressed for time now that my edits are in progress, I’ve put my Gobekli Tepe post there to reanimate the discussion. Let’s talk about it. What have you found on the web? What stone might still be unturned for interested learners? What can you share? I’d love to see! Read the details and let’s start the ball rolling. http://anotherstoneunturned.blogspot.com/

Come say say hi!
Subscribe to this blog for the latest happenings. 🙂

Rose Anderson is an award-winning author and dilettante who loves great conversation and delights in discovering interesting things to weave into stories. Rose also writes under the pen name Madeline Archer.
View all posts by ~RoseAnderson →
This entry was posted in Past Posts - you'll never know what you'll find and tagged Qi. Bookmark the permalink.

2 Responses to The A to Z Challenge – Q for Qi