The A to Z Challenge – E for Enterolith

Today’s Calliope’s Writing Tablet post is brought to you by the letter E — E for Enterolith.

When Ron Weasley inadvertently drank poison in the novel The Half-Blood Prince, Harry Potter saved his life by stuffing a bezoar into Ron’s mouth. A bezoar is an Enterolith — a stone-like formation, or concretion, found in the gastrointestinal tract  of certain animals, especially ruminants (cattle, sheep, goats, deer, and giraffes).  Just like a pearl forming around a grain of sand inside a mussel shell, enteroliths generally grow around an undigestible irritant such as a stone or piece of twine.  They’re mostly comprised of hair and stomach secretions and are really not all that rare. Odd to note, these stones have inexplicably built a reputation as lucky things. Odder still, enteroliths are ground and used as Chinese folk medicine.

The name bezoar comes from the Arabic word badzehr, which literally means antidote. For centuries, enteroliths were believed to cure the effects of any poison, hence JK Rowling’s use of them in the Harry Potter story. This age-old belief was put to a test in 1575, when a cook at King Henry III”s court was caught stealing and was sentenced to death by hanging. It just so happened that Ambroise Pare, surgeon and bezoar skeptic, desired to test the antidote properties of the enterolith that day. Given the choice, the cook agreed to be poisoned rather than be hung.  Needless to say, the cook died in agony several hours later. Bezoars are also said to cure animals and people of rabies. This is done by attaching the stone to the wound to suck out the poison.

Considering their historical and modern uses, it’s no surprise that enteroliths are also called Madstones.  This makes perfect sense to me.

Imagine popping one of these beauties into your mouth. *gag* 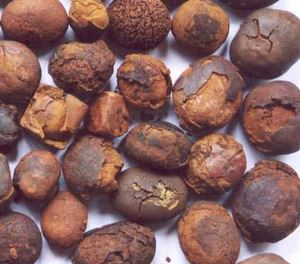 Come say say hi!
Subscribe to my blog for the latest happenings. 🙂

Rose Anderson is an award-winning author and dilettante who loves great conversation and delights in discovering interesting things to weave into stories. Rose also writes under the pen name Madeline Archer.
View all posts by ~RoseAnderson →
This entry was posted in Past Posts - you'll never know what you'll find and tagged bezoar, enterolith. Bookmark the permalink.

2 Responses to The A to Z Challenge – E for Enterolith