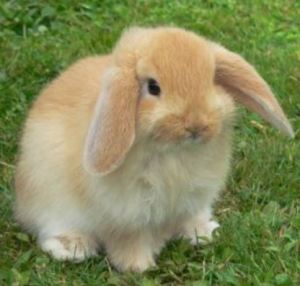 Here’s my Sneak Peek from Book 2 in The Witchy Wolf and the Wendigo saga.
Setting the Stage: Having taken Livie north to John’s family on the reservation to keep her safe, Ash introduces himself to the Redleaf family. At this point, they only know of him through legends. I chose it because Ash turns into a rabbit.  🙂

Manners dictated they not ask to see his transformation. Cora, the other non-Indian in the room, had no such compunction when it came to speaking the desire she knew to be on everyone’s mind. “Would you mind showing us the dog you were when Livie ran you over?”

Olivia laughingly said, “Hey. That was an accident.”

You could have heard a pin drop. Then Mayweather, Abbie, and John all rushed to say it was not necessary. Although Cora had only asked to see the dog, this was a sacred gift, not a sideshow.

Ash laughed and taking Cora’s hand, gave it a squeeze. “I would be honored to show this gift to you and I thank you for suggesting it. It’s important to me that you understand what was given to me and what I am because of it.” He went on to explain his grief and his request to watch over his wife’s grave forever. He did not explain that he was meant to wait for her to be born again. Perhaps one day he’d tell John. Rising from his chair, he stood in the middle of the floor. “Since the gift was given — in all these years — I’ve only ever shared this with John and Livie.”

They watched transfixed as Ash drew a breath and disappeared. All that remained was a heap of clothing and a pair of shoes. May and Cora gasped. Abbie’s eyes grew wide in disbelief. Winston went to sniff the empty clothes. Having seen this miracle before, John and Livie just smiled at one another. It was far from boring.

A small brown snake slithered to the top of the pile of clothes. Winston took a step backward in a dog’s natural wariness of snakes. Suddenly the snake became a fat field mouse. The mouse shifted into a small rabbit. Ears reducing, the rabbit became a skunk then quick as a wink it became a coyote. The coyote’s snout and legs lengthened and the wolf with the unusual markings took its place. He sat and gave them a very wolfish grin. 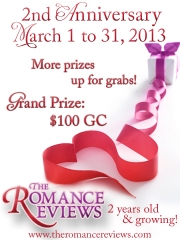 When you’ve checked out all great sneak peeks today, visit my satellite blog http://calliopeswritingtablet.blogspot.com/ I’m taking part in The Romance Reviews 2nd Anniversary Party.  Read my excerpt, answer the simple multiple choice question on the the Romance Reviews site and you could win! Lots of other prizes on their site too. Learn the details there.

I haven’t had a chance to choose a winner for last week’s hop. The winner will be notified sometime this week. Thanks for playing everyone! Have a happy day.