Sneak Peek Sunday AND the Lucky in Love Blog Hop

Feeling Lucky?
I am. I’ve recently launched a new novel — The Witchy Wolf and the Wendigo (Book2 Eluwilussit)
Because of that, I’m doing two things at once on my blog today — the Sneak Peek Sunday AND the Lucky in Love Blog Hop.

First, here’s my Sneak Peek —
Setting the Stage:
It’s the morning after Ash’s declaration of love for Livie. He’s also confessed he’s been living in her house as the wolfish dog she accidentally hit with her car. In this scene, he tells her the ancient shaman who murdered his wife and unborn child 3000 years before still lives.

“What do you mean, we must leave?” So distracted since Ash had come to her door last night, she’d completely forgotten Cora’s words. She remembered them now. He told me to go home and pack. We’re headed north to the reservation. She asked suddenly, “Ash, why did John and Cora go to the reservation?”

“I sent them there.”

Olivia considered those words. While Ash looked at least ten years younger than John, he was actually an elder — elder was an understatement — and John had the deepest respect for his elders. If Ash had sent them north, he’d go with little or no questions asked. She, however, needed answers. “Why?”

He covered both of her hands in his. “Remember the story John told yesterday, the story of my life as it once was? There was a man—”

Ash nodded. “Long ago when I knew the man, his name was Eluwilussit.” 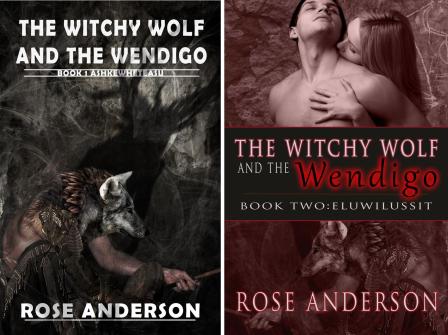 Find both books in the saga here.
And you can use Amazon’s Look Inside feature to read more.
Rose Anderson on Amazon 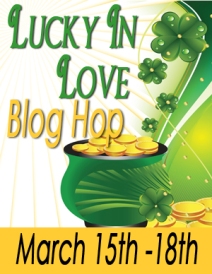 Now let’s go to the Lucky in Love Blog Hop! Follow this link to 300 authors:
Lucky in Love – List of Participants

You can’t beat 2 grand prizes, unless you add in 300 additional prizes! And that’s what you’ll find on the other blogs. My prize is an authorgraphed copy of any of my five ebooks. Your choice!

1st Grand Prize: A $100 Amazon or B&N Gift Card
2nd Grand Prize: A Swag Pack filled with paperbacks, ebooks, bookmarks, cover flats, magnets, pens, coffee cozies, and more!
(And, you’ll find more prizes on each of the blogs.)
As always, be sure to leave your email address when you leave comments.

So to finish my discussion of three, as represented by the three-leaf clover, I did a little research. From Poseidon’s Trident to Odin’s Trefot, significant threes have always been around. The ancient civilizations were full of them. Just off the top of my head I have: three Fates, three Furies, three Graces, the three-headed dog Cereus  guarded Hades, and the three trials of Jesus.

The number three figured prominently in Euclidian geometry too. This is the mathematical system attributed to the ancient Greek mathematician Euclid. In other words, we wouldn’t have triangles without three. I won’t even go into pi or Fibonacci.

On the fun side, the number 3 is the mystical, magical, and spiritual number featured in many folktales. Aladdin gets three wishes from the genie. The queen only gets three guesses to figure out Rumpelstiltskin’s name. Goldilocks takes advantage of the three bears, and the three billy goats gruff do a number on the troll. Three little kittens lost their mittens, three blind mice go wandering, and we can’t forget that Winkin, Blinkin and Nod went to sea, or the Butcher, Baker, the Candlestick maker all took a bath in a tub. What’s more, we all know what happens to the three little pigs and their shoddy home construction.  Fun stuff, three.

As far as three goes. I experimented with three  in my own writing  and painted a broader portrait of love in Loving Leonardo. My Victorian trio’s tale continues with the soon-to-be released Loving Leonardo – The Quest.

Tomorrow…blurbs!
Be sure to visit all the blogs each day — you never know what you’ll find.
And…be sure to comment with your email to win!

When you’re all done visiting the Lucky in Love authors,
stop by my satellite blog for a full 1st chapter from Book 1.
I’m taking part in The Romance Reviews 2nd Anniversary Party,
my part comes at the end of the month.
Lots of prizes, and one from me too. Learn the details there.