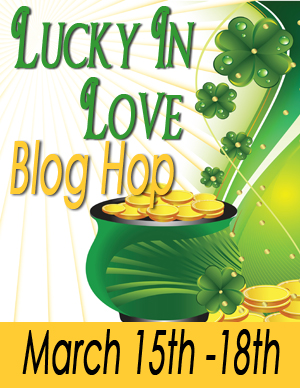 Today begins the Lucky in Love Blog Hop! Follow this link to 300 authors:
Lucky in Love – List of Participants

Just take a gander at the 2 grand prizes:

1st Grand Prize: A $100 Amazon or B&N Gift Card
2nd Grand Prize: A Swag Pack filled with paperbacks, ebooks, bookmarks, cover flats, magnets, pens, coffee cozies, and more!
(And, you’ll find more prizes on each of the blogs.)
As always, be sure to leave your email address when you leave comments.

My prize is an authorgraphed copy  of any of my five ebooks. Your choice!

So what’s the big deal about a four-leaf clover?
Aside from the perplexing “luck” of a dead rabbit’s foot, no other symbol says luck like the four-leaf clover. Why? Because clover, aka trifolium, is by nature a three-leafed plant, and that makes extra leaves uncommon.  You know  how some people seem to have fortune in one form or another always smiling on them, while others seem to walk around with their own personal storm cloud over their heads? Well, I have a theory that goes with the rarity of extra leaves on clover — Not everyone can be lucky at the same time. Think about it.  If they were, there would be no unlucky to contrast lucky with. Therefore no one would be lucky! Luck needs to be rare so we feel fortunate and lucky when it’s ours. LOL  I’m a writer. I ponder these things!  But there’s good news for the unlucky among us – four-leaf clovers are uncommon, but not impossible to find. Just about every patch of clover has at least one extra leaf buried in the normal clump.

Living with the same patch of clover in my yard for approximately 25 years, I was completely unaware of the luck just waiting to be plucked. My eyes opened the day we had a guest who’d been a an expert clover hunter as a child. He proceeded to find one, then another, and another. He went on to explain that the genetic variation that produces extra leaves, will continue to produce extra leaves for the life of the plant. And as they all flower, pollinate, and seed in the same spot, the likelihood of the trait recurring exists. True? I don’t know, but that made sense to me. His explanation seemed to fit my experience with the clover patch. I looked and sure enough, I found one, then another, then one with 7 leaves. Every year, the odd clover comes back, though some years produce more multiple leaves than other years. So…do I feel extraordinarily lucky? Yes I do. I’ve been lucky in love, lucky in family and friends, lucky in my place in the world. Fortunate indeed. Everyone knows it can always be worse!

According to the Guinness Book of World Records, the most leaves on a single clover stem is 56! Wow. Shigeo Obara of Japan found it 2009. He’s also the previous record holder in this category. That clover had 19 leaves. Makes me wonder how lucky he is! Extra details here: Guinness World Records: most-leaves-on-a-clover

Tomorrow…I’ll post about lucky traditions associated with three-leafed clover.
Be sure to visit all the blogs each day — you never know what you’ll find.
And…be sure to comment with your email to win!

I have a new release!
The Witchy Wolf and the Wendigo
(Book2 Eluwilussit)

When you’re all done visiting the Lucky in Love authors,
stop by my satellite blog for a full 1st chapter from Book 1.
I’m taking part in The Romance Reviews 2nd Anniversary Party,
my part comes at the end of the month.
Lots of prizes, and one from me too. Learn the details there.
🙂
My Other Blog 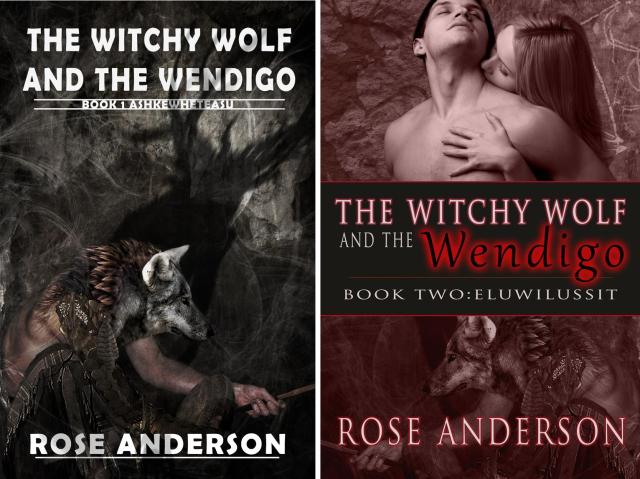