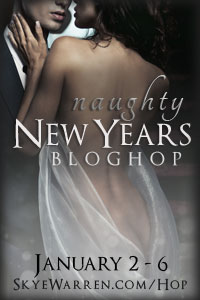 To recap: More than 200 authors are taking part in five days of fun and prizes. Visit the participating blogs and leave a comment and your contact email on that day’s post. Be sure to visit every blog on the list and comment each day to increase your chances of winning the grand prize: a $100 Gift Card to EdenFantasys.com (an adult toy store), and a 10-book bundle of ebooks.

You could walk away from the Hop with a lot of prizes. Every author is offering additional prizes on their blogs. Mine is an ebook copy of Loving Leonardo – An unusual polyamorous, bi, Victorian love story with a touch of interactive art history. This part one in a two-book story. Loving Leonardo — The Quest comes out sometime late January or early February.

So… to continue my part in the event, I’m introducing my books. My most recent release is The Witchy Wolf and the Wendgo.
To take a peek inside the book, go to Amazon.
http://www.amazon.com/dp/B00AFFFESI

What does an immortal Native American shaman do when the grave he’s sworn to watch over for all eternity disappears under urban development?
His purpose of guarding his wife’s burial mound is gone, Ashkewheteasu seeks to end his immortal existence. In his despair, Ash assumes the form of a wolf and steps in front of a moving car and into the life of Dr. Olivia “Livie” Rosalini. The veterinarian saves the animal’s life, and in the process saves the man within. Livie has no idea the wolfish dog she’s taken into her home and grows to love is a magical being seeking to win her heart as a man. While Ash is learning a new world filled with new love, friendship, and happiness, an old menace makes plans to steal it all away; just as he had 3000 years before.

::Fun Fact::
This story was inspired by a local urban legend — the Wisconsin Wolf Man.

::Best Slapstick by an Ancient Shaman::
Knowing he had to resume his wolf form at Livie’s home, he took a deep breath and shifted, but his inebriated mind was not concentrating and he ended up with a raven’s head atop his man’s body. He tried again. Forgetting that he still wore clothes, he found himself a small bird, pinned and struggling under the heavy garments that had fallen to the ground in a heap. He shifted into a feathered snake before taking the form of a mouse and working his way out of a sleeve.

See you tomorrow for day 3!

7 Responses to Day 2 of the Naughty New Year’s Blog Hop!