If it’s your first time here, you still have a chance to win prizes at all the blogs. Just visit them, scroll back to the posts of the last three days and comment on each one. We’re giving away an ebook package and $60 in eGift Certificates ($50 Amazon gift card and $10 Bookstrand Bucks) in a grand prize drawing and it’s valued at over $100! Winners are chosen from among the comments so be sure to leave your contact email. 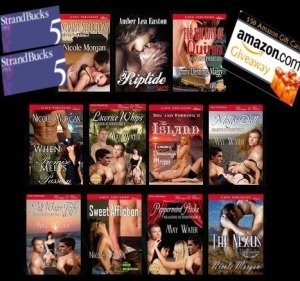 And here’s the Grand Prize

Recap: About those ebook prizes ~
If you don’t own a Kindle but still want those ebooks, no worries. Here’s a download for a computer version: Free Kindle for PC

How better to show your love than to spend imagination,  creativity, and precious time on the people you love by giving something you’ve made yourself. Whether it’s a delicious baked or canned goodie, or something cute or practical, it all says I appreciate you. As stated before, I love to repurpose things — that is — to make nice useful things out of discarded things just because I love the challenge. It not only gives someone something unique and cool, it keeps junk from filling our landfills and cuts back, albeit slightly, on pollution caused by the mass production of stuff that society considers gift-worthy but often ends up in the landfill ridiculously fast. It doesn’t have to look like trash either. The following are two such handmade gifts with instructions. Again, I’m sorry I don’t have pictures. The steps should be easy to follow though.

Repurposed Stationary Set ~
I started this project by buying a sustainably grown bamboo pen for my daughter (off ebay). Then, using two sizes of opened and flattened envelopes as templates, I made crazy envelopes out of full page magazine ads and catalog pages. A fine bead of regular old Elmers glue sealed the sides of my new envelopes. I could have used a glue stick but having had glue stick projects come unglued before, I opted for the sure thing.  I bought a 100% recycled paper writing tablet and made a custom cover for it from a very nice picture I found online depicting the recycle symbol as the top of a stylized tree. I also found a Save a Tree/ Reuse Paper self-inking stamp. I bundled the envelopes in two stacks and put it all into a cigar box that I covered with cancellation marks from all over the world.  These were found by doing simple image searches online. Cancellation marks are not necessary, but quite cute. It was one of my more fun projects that looked like it came from one of those fancy and pricey catalogs. Come to think, all four of the gifts I’ve given how-to’s for in the past few days looked snazzy and were well-received.  🙂

Ransom Note Refrigerator Magnets ~
Picture one of those TV crime show ransom notes where the words are glued together from newspapers and magazines. Now picture these individual letters sticking to the front of your refrigerator. Cool huh? Being a Scrabble fan I was confident words could be made if I followed the number and ABC count of Scrabble letters. I also added questions marks and exclamation points for emphasis. After cutting large alphabet letters from cereal boxes, glossy sales papers and magazines, I stuck them on peel and stick magnet sheets. I bought those, but it’s also a great way to use up those freebie ad magnets and out of date magnetic calendars. Just carefully peel away the text or picture to get to the sticky base underneath.  Tip: arrange them this way and that to save space. I then used a matte finish Modpodge coating. After they dried, I cut them out.  They came out just great and got a lot of laughs. You could also make your own Poetry Magnets this way.

Try for your own ebook copy of Dreamscape. And I’ll even sign it for you using Authorgraph!
Rose will autograph your ebook – click here!

You can find me just about anywhere these days. I’d love if you’d stop by. Check out my books or just say hi.

Imagine if you will a story begun in the halls of Mount Olympus long before this modern tale was conceived. It was a time when the god Hermes flew on his winged sandals and carried messages from the gods to the mortals below. And between that time and this, couriers became postmen and handwritten letters became bytes. It is said the gods still speak to those who listen…

Best Quote:
Allow me to pay homage to the goddess you are. Let me begin at your little feet. Feel me lightly kiss, and yes, you will feel me bite ever so slightly, for the need to devour you is great.
Reply lover.
I await.
S

What does an immortal Native American shaman do when the grave he’s sworn to watch over for all eternity disappears under urban development? His purpose of guarding his wife’s burial mound gone, Ashkewheteasu seeks to end his immortal existence. In his despair, he assumes the form of a wolf and steps in front of a moving car and into the life of Dr. Olivia “Livie” Rosalini. The veterinarian saves the animal’s life, and in the process saves the man within. Unbeknownst to Livie, the dog she’s taken into her home and grows to love is a magical being seeking to win her heart as a man. While Ash is learning a new world filled with new love, friendship, and happiness, an old menace makes plans to steal it all away; just as he had 3000 years before.

All titles on sale now!

Collectors of Romance Memorabilia,
Would you like some soon-to-be-famous author swag? *grin*
Scroll back to the first blog hop post to choose,
send me an email with your address, and I’ll mail your choice.
(sorry, the bumper stickers went fast)

Join me and more than 300 authors and publishers for a month of goodies at The Romance Reviews’ big Year End Splash Party. Discover new authors and read hundreds of excerpts and grab your chance at over 300 prize! Like I’ve mentioned before, I’m there the week of December 9th. To see my part in the whole thing, I need to send you to my satellite blog.
Rose Anderson’s Satellite blog on blogspot.com There you’ll find an excerpt of my recent release — Loving Leonardo.

The week of December 9th my question will be posted on The Romance Reviews site. Simply find my name on the participant list. Follow the link given to my excerpt posted on my satellite blog, read it, then go back to answer my multiple choice question on The Romance Reviews site. Play the other games and amass more points and you’ll have a pretty good chance to win an ebook copy for yourself!

Thanks for joining me in this fun little event.
The Dreamscape winner will be hearing from me this week.

My best wishes for the happiest of happy holidays to you and yours.