The Art of Formula & The Romance Review’s party details

An author’s life involves more than the creation of literary worlds, it’s an endless sea of self-promoting. It’s necessary because there’s also a Grand Canyon full of books out there and people won’t read yours unless they find them. Now there’s a needle in a haystack. For an introverted person such as I, this takes no less than monumental effort.

Beyond that, I was told early on that the backlist, that stack of previous novels written, was the path to success. It’s definitely a slow go. My stories come to me one line at a time. I’m not a formula writer so I can’t mechanically churn out plug-n-play stories. I find it fascinating that some people can do this successfully. It sort of looks like this…

Story – It doesn’t matter when or where or even who, but the hero must marry against his will or lose his inheritance.

She is:
A. A penniless orphan with an undiscovered royal lineage
B. A Celtic high priestess
C. A salesperson in a high end department store living on public assistance
D. A goth chick working at an all-night diner.

External forces working against a happy outcome = their obvious differences.
It can simply be he chafes at the idea, acts like a jerk, but inexplicably falls in love anyway or love triumphs despite one of these:

There you go. I’ve just created four separate books out of one story line. I know of authors who crank out a book a month using this formula. I have to wonder though… do repeat readers eventually burn out on all the same stuff different day scenarios? I wonder because I’ve had this happen to me and it was like a long time love affair had ended for me. As a reader, I have my favorite authors. I’ve read one for 20 years. Last year I eagerly bought her latest and couldn’t get past the third chapter. Damn. I’d read it before…several times. Only the names, dates, characters and location were different than the last several books she’d written. The fan I was never saw it until that moment.   I sorted through the years to my favorites and kept those on the shelf. The formula books had to go because I knew my reading tastes had moved on. Sad business that.

As a writer, I don’t think I could put the emotion I do into formula books. Still…the idea of the mega backlist appeals to me!  🙂

Eleven months of health drama immobilized my author promotion. During all that, I mainly focused on writing. Since launching Loving Leonardo, I’ve gotten back in the swing of things. In other words, I’ve put myself out there again.  😀

I’ve scheduled several blog appearances and interviews for November and December in anticipation of the big Kindle sales. One of these is the large month-long Year-End Splash Party 2012 on November 15th held by The Romance Reviews. The ad poster came today and until the promo party starts ends at midnight on December 15th, anyone stopping by will see it here.  I’ll blog all the other useful things too.

You’ve seen the small banner ad at the end of each blog post I put on. TheRomanceReview.com (TRR) really is a terrific site for Romance readers – they have reviews, the latest news in the world of romance literature, and reader contests. And for authors, they have a bevy of author-related things to highlight and showcase our works. I’ve always found them friendly people too.

The Year-End Splash Party 2012 features more than 200 authors, several publishers, and more than 200 prizes. Like I said, it’s a large event. Between now and November 15th, I’ll be busy putting together my event contributions. I plan on offering excerpts and author insights from all of my published novels and a few of my up-and-coming works. I’ll also offer a few mini-contests. 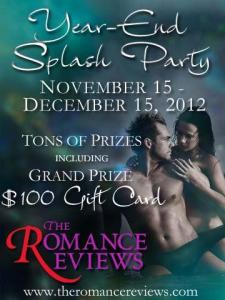